“Whatsoever Is More or Less Than This, Cometh of Evil” – The Case for Constitutional Limited Government 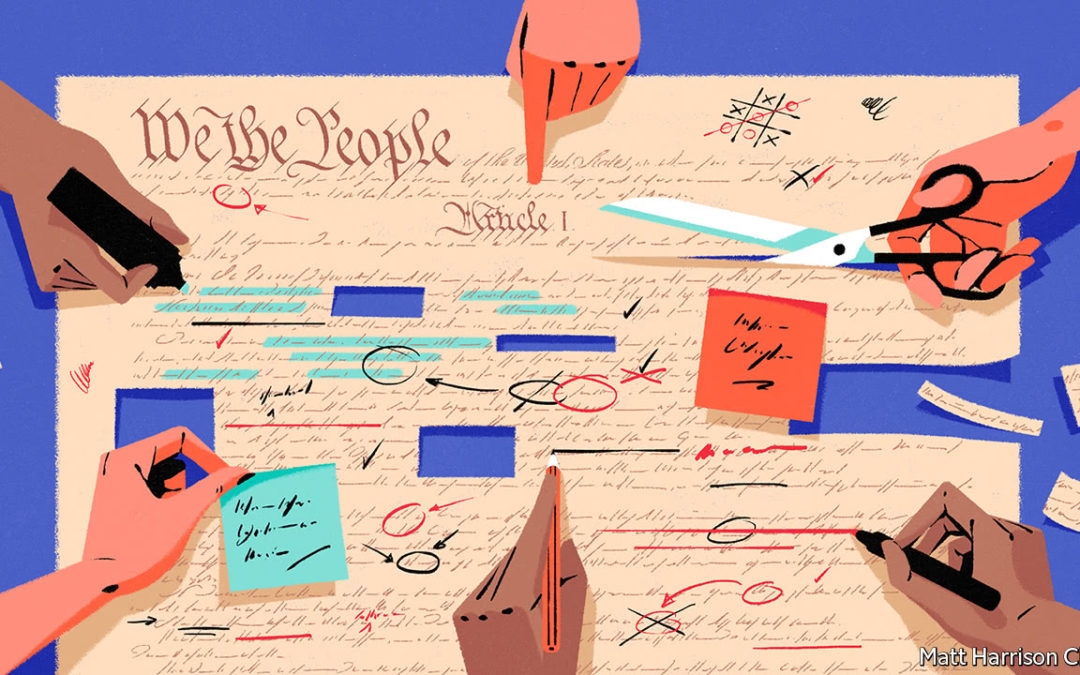 (Photo courtesy of The Economist)

Something that those who believe in freedom often struggle with is finding what is the best way to preserve or maximize it. What will lead to the most happiness? What will result in the most freedom? Is it through pure democracy? Is it through a socialist welfare state? Is it through no state at all? The answer of course, is through a limited constitutional government, but why? Doesn’t any government at all violate rights? Why is our constitution and the limited government it establishes not only justified but the ideal form of government for our fallen world of fallen people?

The answer to these questions is vital as we move forward in the defense of our Constitution and conservative principles. The beginning of this answer lies with human nature. Human nature is not inherently good. This is a self-evident truth that we see in ourselves everyday on a micro level and on a larger scale in the wake of natural disasters when government is no longer there to maintain order, such as in the aftermath of Hurricane Katrina. That behavior of violence and disregard for the lives, liberty, and property is our baseline, and we can quickly return there; some never leave it. This aspect of human nature results in the limitation or destruction of human freedom — freedom being the ability of individuals to enjoy and exercise their preexisting, God-given natural rights which include the right to life, conscience, speech, and to acquire and control property.

So what do we do to protect our rights from the fallen human nature of others? Natural law justifies every individual to use force to defend his or her life, liberty, and property. This is the only case in which force against others is justified. In other words, force is justified in the defense and maximization of freedom.

If an individual is justified in using force to defend his or her life, liberty, and property, it is also justified for a group of individuals to combine their abilities to create a common force to defend their lives, liberty, and property constantly. This truth forms the basis for government or the state and also provides the moral bounds of justified government action or force. If individuals are justified to use force only in the defense of freedom, than government which derives its power from the people can only use force in defense of freedom. The creation cannot possess powers that the creator does not. Thus if government uses its power to take the property of one citizen to give to another, even with the best of intentions, it is legalized plunder or theft. If it was wrong for the individual to do it, it was wrong for the government to do it.

If these things are true — and they are — how do you justify taxation to support the common force? Is that not legal plunder? No, because it defends and maximizes freedom. Government maximizes freedom through rule of law that defends rights from domestic crime, punishes offenders, and protects its citizens from foreign threat, thus preventing imperfect human nature from reducing our freedom. The forced coercion is justified by this maximization of freedom, as well as through its prevention of another form of theft: free riding.

Free riding is an economic term used to describe the situation where one individual is able to directly benefit from a good or service without having to pay for it. As long as someone is paying to provide, they can consume. A good example of this would be your neighbor using your WiFi. You pay the bill, but they are still able to use it. They are in effect stealing from you, even if it didn’t affect your speed, as they are using a service they didn’t pay for. You paid for that service, making it your property and would be justified to defend yourself from your neighbor stealing it through free riding. Additionally, he is artificially increasing the costs of the service for you by not paying his fair share for his usage. If he paid for his usage, your costs would go down, which makes the additional money you had to pay a form of theft.  As such, he is violating your rights and minimizing your freedom, and you can defend against that theft through a suit to recover your losses. Free riding is a form of theft that can be justifiably stopped using governmental force.

National defense, police, and the court system that we have to enforce laws and protect freedom are services that we all use constantly. As you read this article, you are using them. The military is protecting you from foreign threats, the police are catching bad guys and deterring others from harming others, and the courts are sentencing bad guys. By just being here in the country you are using those services. If you don’t pay your taxes that go to those things and you free ride, you are stealing from your fellow citizens who are paying taxes, artificially increasing the taxes they pay. You are using the services they are providing and are acquiring it through involuntary means, thus violating the rights of your fellow citizens. As explained earlier, this would justify them in suing you or using force to stop you. To save us the trouble of suing, we levy a tax on all in the nation, and because these measures maximize freedom, they are justified by natural law. So, contrary to the claims of some, in implementing and enforcing limited taxation, rights are upheld, not violated.

In addition to defending freedom by stopping free riding, this also ensures that the national defense, police, and courts are provided at all. If individuals figured out they could free ride and still be protected, there would be a powerful incentive for more people to free ride, which would eventually result in these services’ failure and destruction. This would thrust us back into a state of nature where rights are not protected and freedom is reduced. We don’t want that. We want to be as free to enjoy our rights as possible. Thus, limited constitutional government maximizes freedom.

It is these truths that make limited constitutional government justified and necessary to the enjoyment of freedom. Our Constitution creates a federal government capable of doing these important roles that maximize our freedom, and more or less government than this will reduce it. Of course we still must be wary of government and work hard to ensure that government is limited to those freedom-enhancing roles. The Founders did this through designing a limited government with enumerated powers, checks and balances, and a Bill of Rights. That is why we must work hard to conserve it, maximizing freedom and securing the blessings of liberty to ourselves and our posterity.