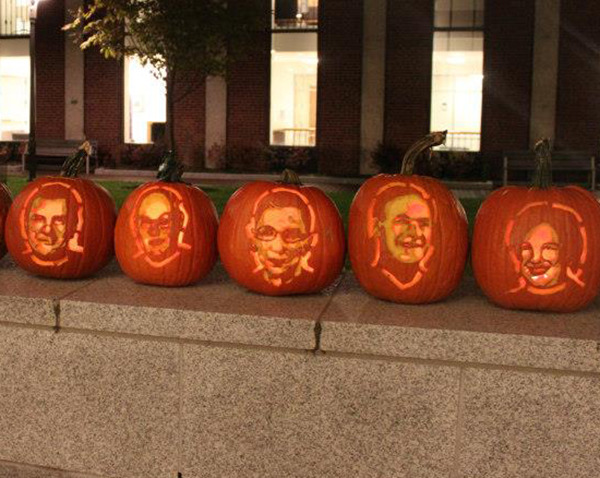 Take a good look. This is comprehensive:

As I’ve covered before, the Constitution does not grant the judiciary any lawmaking authority, and that includes the ability to overturn a law or declare one void — no matter how unconstitutional. In Federalist 78, Alexander Hamilton argued that it was the duty of the judiciary “to declare all acts contrary to the manifest tenor of the Constitution void. Without this, all the reservations of particular rights or privileges would amount to nothing.” He may very well have been right. But apparently not enough Founders agreed with him, as they didn’t include this power in the final text of the Constitution.

Famously, Chief Justice John Marshall echoed Hamilton’s reasoning in the 1803 decision Marbury v. Madison. But even as he acknowledged that the Constitution did not officially grant him the authority to strike down a law he considered unconstitutional, he seized the power for himself.

And the rest is history, right? An endless stream of judicial overreach and judgment declared as law? Arbitrarily defining away our natural rights and inventing new ones? Claiming words mean what they clearly don’t mean and that words don’t mean what they definitely mean? Not quite that simple. There’s a little more history to fill the gap, and it’s instructive for our day. After all, sometimes the road to serfdom is as forthcoming as John Marshall. You might even say it’s Swift (too early for you to get this joke). But more often, it’s subtle, creeping, and dare I say Erie (another premature pun. It won’t be the last).

This next part requires a Story: Joseph Story. Joined by the unanimous Taney court (not known for its sound decisions. History won’t let it off scot free for not setting Scott free), Justice Story declared in Swift v. Tyson that the word “laws” in the Rules of Decision Act, a.k.a. § 34 of the Judiciary Act of 1789, referred only to statutes, not judicial decisions. Were their decision to stop there, this would be a bare-bones, accurate understanding of the legal system: judges interpret laws, but they don’t make them. But of course, there’s more to this Story.

The issue in Swift was whether to follow a traditional New York interpretation of law or to apply the modern federal trend. The case was in federal court under diversity jurisdiction rather than a federal question, so the Rules of Decision Act demanded that state law apply. The Taney court (correctly) concluded that “laws” refers only to statutes, but its motives weren’t really originalist.

Fast forward almost a century to 1938. Shortly after the end of the Lochner era, the Supreme Court introduced a new standard in Erie Railroad Company v. Tompkins. The Erie Doctrine struck down the general federal common law of Swift and is best known today by federal courts and first-year law students as a roadmap to determine when and how to apply state or federal law in cases arising under diversity jurisdiction.

But Erie slipped in a major coup, revolutionizing American jurisprudence without calling attention to itself. In overturning Swift, Erie declared that under the Rules of Decision Act, federal courts in diversity cases must apply the law of the states in which they sit, including the judicial doctrine of the state’s highest court. In other words, “laws” suddenly included judicial decisions. Federal courts retained their own common law (just not a general one), which simultaneously became equal to statutes just like its state-level counterparts.

None of this is to say that judges hadn’t treated precedent as binding law before, or judgment as equal to statute (or even superior, if they decide the statute is unconstitutional according to whichever contrived metric they choose). But Erie was the moment when that status became official at both the state and federal level– that nine unelected, life-tenured oligarchs, robed from on High, could rule the nation with the flick of a pen —  and it wasn’t even the central focus of the opinion.

Learn from this moment. Every policy proposal has a stated purpose — and sometimes that’s bad enough. But if we’re not careful, we might not notice something Erie lurking in the shadows of the promise.