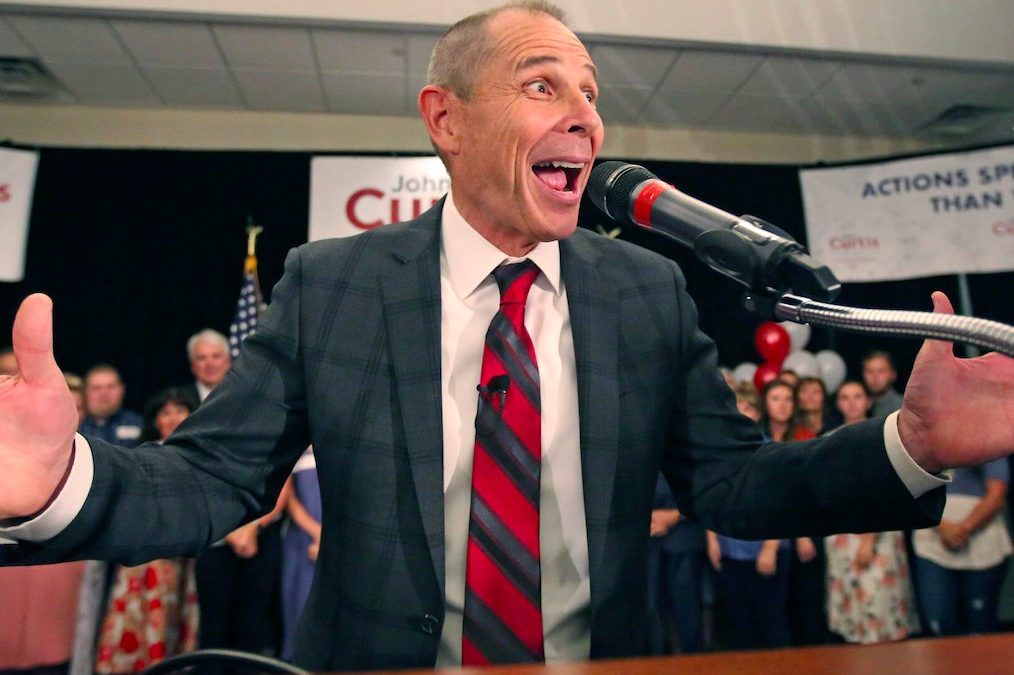 The bid for former Representative Jason Chaffetz’s congressional seat has been a chaotic mess from the outset. And John Curtis’s victory on Tuesday proves the disaster maintained pace right up to the finish line.

The troubles started when Rep. Chaffetz, who had just been reelected in 2016 to his fifth term representing my native Utah 3rd District, announced in April that he would not be running for reelection in 2018. Never satisfied with his own statements, Chaffetz returned a month later on May 18th to inform the district that he would be resigning from office at the end of June.

This shell game was embarrassingly reminiscent of Chaffetz’s approach to the 2016 presidential election: endorsing Donald Trump early on; condemning Trump after the “Access Hollywood” tapes and saying he wouldn’t be able to look his wife and teenage daughter in the eye if he voted for such a man; then doubling back with what he insists was not an endorsement, essentially saying, “I’m voting for Trump, and here’s why you should too,” which by any reasonable metric is the epitome of an endorsement. Unfortunately, the events since then have roughly followed the same pattern.

The Utah Republican Party held a convention in June to determine its candidate based on a caucus of GOP delegates. Former state legislator and true conservative Chris Herrod pulled out a win after a five-round run-off, beating out 10 other candidates, including eventual primary winner John Curtis, who had a fairly dismal showing at the convention. But the delegates had spoken and Herrod was on his way, right? Nope.

In 2016, the Utah state legislature passed the controversial and unarguably unconstitutional SB-54, in which state government gave itself authority to force political parties — private organizations — to nominate candidates as the state sees fit. According to the bill, the onus of selecting a political candidate shouldn’t fall to measly delegates — party devotees, nominated by their peers, known for their political activity and dedication. Instead, candidates can sidestep the caucus altogether and gather signatures to gain ballot access, resulting in this year’s three-way primary between Republican nominee Chris Herrod, Provo Mayor John Curtis, and newcomer “my dad is famous” Tanner Ainge. Curtis had declared his intention of running in the primary via signatures regardless of the results of the convention, and Ainge didn’t even compete for the party’s nomination.

Herrod, the only proven conservative in the race, was endorsed by Senator Ted Cruz, who attested to Herrod’s loyalty to four key conservative issues: “having principled constitutionalists on the U.S. Supreme Court, repealing Obamacare, taking on regulatory reform, and tax reform.”

Somehow, despite losing the party nomination, John Curtis was still able to collect endorsements from 23 Utah mayors and sitting Governor Gary Herbert — as if there weren’t enough evidence that the state government resents the caucus/convention system. And have I mentioned that Curtis has not even been a Republican for very long? He readily admits that he formerly ran for office as a Democrat but couldn’t receive the party’s full support because of his pro-life stance. In every other way, however, Curtis falls in line with the Democrats.

As mayor of a town largely populated by socialist college students and professors (believe me, I just left it), Curtis enacted and encouraged one unconstitutional effort after another, resulting in a statist city government. One website has compiled Provo laws and ordinances constituting government overreach with extensive references and links to the actual legislation. Here are some examples:

Curtis, while lacking authority to raise taxes as mayor, backed the council’s tax increases 43 times. His most famous “accomplishment” is an inefficient public busing service, BRT, that hardly anybody likes or uses. It limps along at Curtis’s insistence and taxpayers’ expense.

One of Curtis’s campaign staffers, a good friend of mine, told me at the convention, “John’s a conservative, whatever that means.” Um, no. You don’t just get to claim to be a conservative if A) it’s not true and B) you don’t even know what it means. For the sake of accuracy, I decided to ask John about it himself. He said he’s a conservative because he knows how to get the job done. I decided against pointing out to him that that’s not even close to the actual definition of conservatism. I asked him how willing he would be to defy the GOP or even what’s most efficient in order to preserve the Constitution, and he said he was very willing to go against the party — those Democratic roots shining through. I pressed again on the Constitution, and he insisted that he knew how to get things done efficiently, that he was committed to always choosing efficiency over party. Only after two or three more prods did he concede, “Sure, the Constitution’s very important.” He then moved on to another question. John Curtis is NOT a conservative, and he’s hesitant to even endorse the Constitution.

We may never know exactly what went wrong. A few weeks before the election — a closed primary — the state illegally sent out 68,000 Republican primary ballots to unaffiliated voters. Upon acknowledging the error, rather than recall the ballots, the state encouraged unaffiliated voters (largely moderates) to register as Republicans in order to vote. Several moderate-to-left activist groups called for the same, occasionally endorsing Curtis in the process as the “moderate candidate.” As we’ve already seen, Curtis is not even right-wing enough to be considered a moderate, and 68,000 illegal ballots in a race with fewer than 45,000 counted votes can certainly swing an election.

There’s too much uncertainty and apparent malfeasance to sift through, but to quote the great Luke Skywalker, “I only know one truth:” the Republican Party in Utah is in shambles, and it’s falling to the Left as it goes.

Utah, formerly one of the most reliably red states, is swinging. The Beehive State was divided during the 2016 election, but that was largely in reaction to Trump, not pushback against conservative ideals. This election is different. One of most historically conservative states has rallied tooth and nail behind a politician with openly socialist policies. Utah almost certainly won’t elect a Democratic candidate, so we’re most likely stuck with another congressman who is, at best, “a conservative, whatever that means.”

Kind of makes you wish the Federalist Party would start up in Utah, am I right?