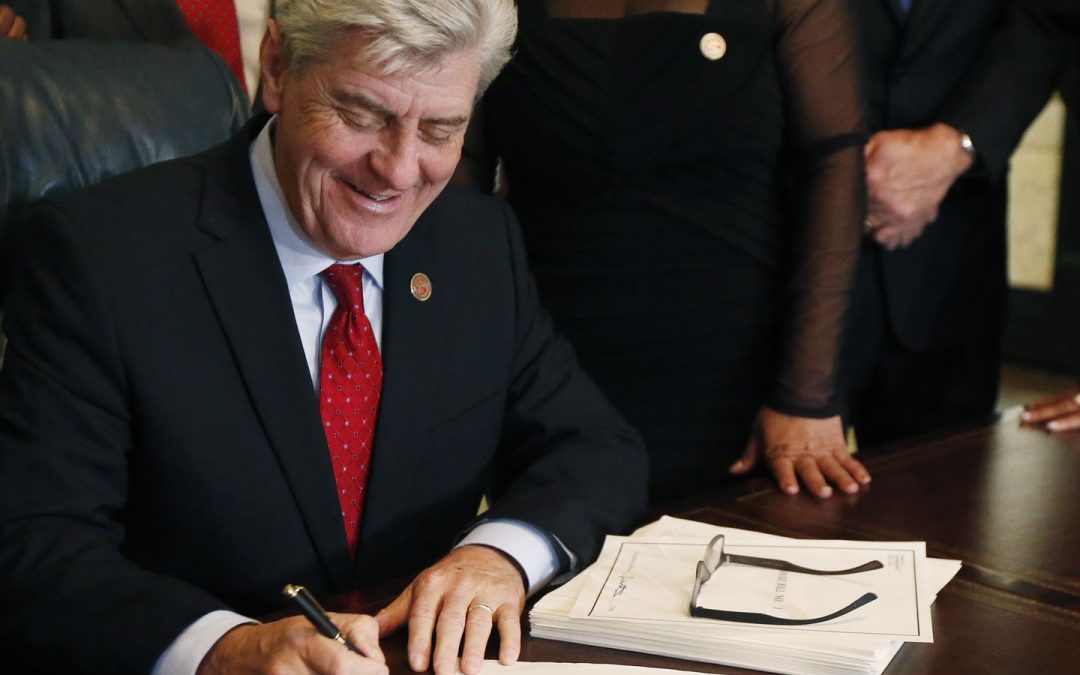 The bill is designed to defend the “sincerely held religious belief or moral conviction for persons, religious organizations and private associations,” and, contrary to what you may have heard elsewhere, it in no way inhibits the behavior of individuals but rather of state government from violating the First Amendment. Each provision is prefaced by the phrase: “The state government shall not take any discriminatory action against…” This is reiterated by the court’s ruling: “HB 1523 does nothing to compel the behavior of these plaintiffs; it only restricts the actions of state government officials.”

The text centers around certain “sincerely held religious beliefs or moral convictions,” which are described as:

“(a) Marriage is or should be recognized as the union of one man and one woman; (b) Sexual relations are properly reserved to such a marriage; and (c) Male (man) or female (woman) refer to an individual’s immutable biological sex as objectively determined by anatomy and genetics at time of birth.”

The legislation also doesn’t signify an endorsement on the part of the state of Mississippi of any of these religious values–just an acknowledgement that, as Governor Phil Bryant put it, “people of faith have rights.”

This bill is a massive step for religious liberty, particularly that of Judeo-Christians, which has long been undergoing an onslaught of persecution from even the highest levels of government.

But this isn’t a knockout–it’s just Round 1. Many on the Left are painting this as a travesty for LGBT rights, and the majority of the Right sees it as a definitive victory of religious freedom. Neither narrative is quite accurate, so I’ll be presenting two perspectives you’re probably not hearing.

But first, some background. Let me just say that this legislation is a beaut. I wish I could go on about it for twenty minutes at least, but since most normal people have neither the time nor the interest, I’ll give you some highlights:

Religious organizations (see Section 9.4 of the bill for definition) are protected in enforcing policies based “wholly or partially” on those three values of marriage between a man and a woman, sexual relations only within such a marriage, and sex as defined biologically at birth.

More specifically, if done in the name of these three values, Mississippi state government may not discriminate if:

Furthermore, if a state official desires to recuse him or herself from issuing marriage licenses or performing wedding ceremonies, they need only notify their superior of such desire for recusal and it will be respected (though state offices must ensure that the issue or performance of such must not be impeded or delayed by prior notice of recusal).

The list goes on, and it’s fantastic. Many (if not all) of the bill’s opponents label it anti-LGBT legislation, but this is observably false. The state is taking no measure to punish LGBT individuals, instead upholding the equal rights of religious individuals and organizations to their own “freedom of conscience.” I’m aware of no Constitutional provision listing a right to force someone to take a picture of you. There is, however, an acknowledged right to the free exercise of religion.

Anything related to the LGBT movement is understandably an inflammatory issue, but what if we approach it with a different perspective? The matter of LGBT “rights” pertains to provisions one and three, but what about item two? Insert a hypothetical heterosexual couple who is “living in sin” according to traditional morals into the situation and it becomes asinine to suggest that a religious organization be forced to violate its principles.

Premarital sex is a violation of chastity in most if not all major religions. In The Church of Jesus Christ of Latter-day Saints (a.k.a. Mormons), for instance, failure to abide by a certain level of personal purity bars you from entering holy temples where marriages are performed. Should a couple engaging in premarital sex and thus violating basic standards of chastity be able to coerce clergy to disregard church policy by performing a sacred ceremony on holy ground for impure individuals? Certainly not.

Should a religious university like Notre Dame (which qualifies as a religious organization under Section 9.4) be punished for requiring that its professors be Catholic? That they not defy church doctrine by advocating for premarital sex? That the professors themselves not cohabitate with someone who is not their spouse? That would be absurd.

Should Jewish adoption services be forced to allow unmarried couples to adopt children, thus contradicting the religion’s fundamental teachings? Should children be confiscated from a home where adoptive parents teach them not to have sexual relations before marriage? No. All parents, adoptive or natural, are permitted to teach their children whatever they deem appropriate. How long before the Left advocates for the separation of children from their birth parents due to traditional moral values? One study shows that nearly half of millennials are at least open to the idea.

If you would allow for churches to discriminate based on a policy of premarital sex, why not indulgence in homosexual behavior or gender reassignment? There is no reason to support one and not the other. And to support neither is either to misunderstand or to disregard the Constitution and natural rights.

This bill can be summarized in five words (four plus a compound, but technically five): churches can enforce morality-based restrictions.

The second and final perspective is to remind the Right not to celebrate quite yet, and not just because the case is being further appealed en banc, meaning “before all the judges of a court rather than by a panel of judges selected from them.”

There’s more to be concerned with going forward, and that’s because of the reason the injunction was overturned. It wasn’t because the law was deemed constitutional, as we would hope, but because the judges determined regarding the original case of Barber v. Bryant that no plaintiff met qualifications to achieve standing before the law.

In its unanimous opinion, the court outlines the standard by which a plaintiff may qualify for legitimate standing, as established by case law Lujan v. Defenders of Wildlife:

“First, the plaintiff must have suffered an injury in fact—an invasion of a legally protected interest which is (a) concrete and particularized, and (b) actual or imminent, not conjectural or hypothetical. … Second, there must be a causal connection between the injury and the conduct complained of. … Third, it must be likely, as opposed to merely speculative, that the injury will be redressed by a favorable decision.” The 5th Circuit concludes, “None of these plaintiffs has clearly shown an injury-in-fact, so none has standing.”

The judges did reference the constitutional basis for their decision, but only in the refuting of standing, not in the law itself: “Plaintiffs seek to…wedge open the courthouse doors to a wide range of plaintiffs alleging Establishment Clause violations who were previously barred by bedrock standing requirements—requirements that are essential to preserving the separation of powers and limited judicial role mandated by the Constitution.” It’s always great when a court understands its role–we just need to recognize that they are leaving the door open for a future case.

The court insisted that “when plaintiffs ground their equal protection injuries in stigmatic harm, they only have standing if they also allege discriminatory treatment,” noting that “Plaintiff Rennick Taylor comes the closest by stating his intention to marry, but that alone is insufficient. He does not allege that he was seeking wedding-related services from a business that would deny him or that he was seeking a marriage license or solemnization from a clerk or judge who would refuse to be involved in such a ceremony.”

So what would happen if a new case were opened in which a religious organization or individual did refuse to perform the ceremony or provide the service? That option is still allowable under the court’s ruling, and I won’t be surprised in the least when it happens. The court specifically acknowledges this option, concluding its opinion, “We do not foreclose the possibility that a future plaintiff may be able to show clear injury-in-fact…but the federal courts must withhold judgment unless and until that plaintiff comes forward.”

The court doesn’t speculate how it would rule in such a case, which is fitting and proper. In that event, we’ll have to see what happens in the kerfuffle between the Constitution, existing federal law (such as the Civil Rights Act of 1964), and the possibility of judicial overreach.