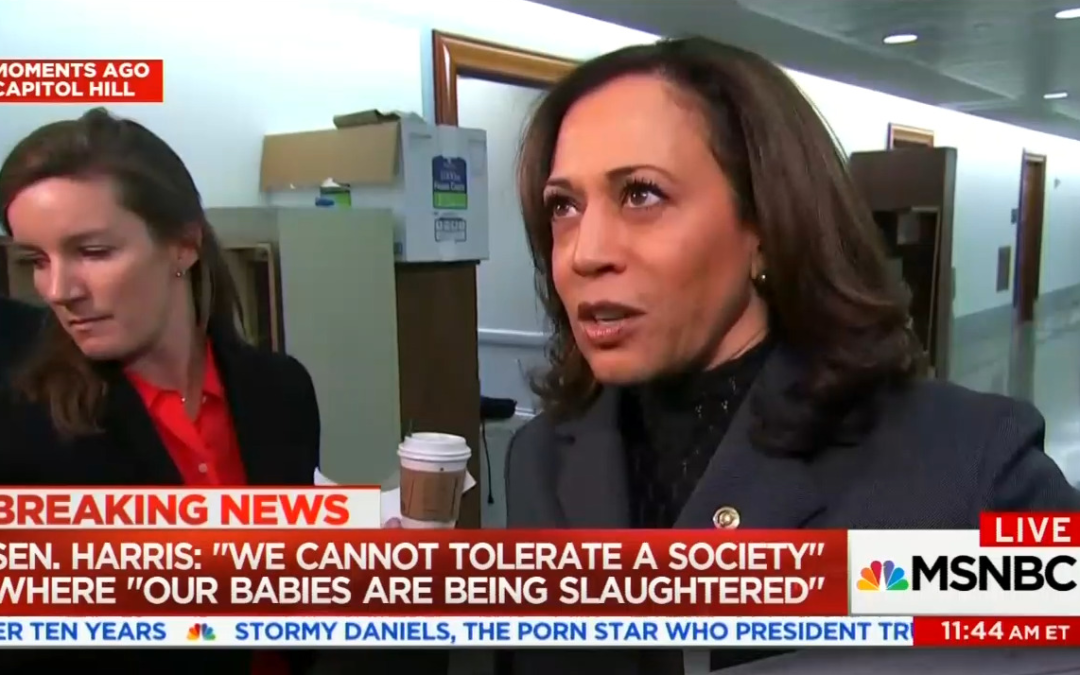 You may have missed it amid the wall-to-wall coverage of the Parkland shooting and the CNN Town Hall, but Senator Kamala Harris (D-CA) has become pro-life — she just hasn’t realized it yet.

Two days after the massacre, Senator Harris told MSNBC, “We cannot tolerate a society and live in a country with any level of pride when our babies are being slaughtered.” This just two weeks after she helped defeat a 20-week abortion ban in the Senate.

According to the Guttmacher Institute, the United States saw 926,200 abortions in 2014, of which Planned Parenthood claims 323,999 — about one-third. In the same year, total gun homicides (including gang and drug related, all age groups, and the tiny fraction that is mass shootings) totalled only 11,000.

(And to anyone claiming that unborn children are not babies or human beings or living things, I recommend Ben Shapiro, as usual, and I’ve already covered whether an unborn baby has rights).

Harris’s appeals to deceased children contributed to increasing cries for a boycott of the NRA, but pro-lifers on Twitter such as Steven Crowder and Devin Sena were quick to point out the irony of supporting a murder mill that receives over $540 million in taxpayer funding while berating a much less influential group whose purpose lies in defending basic constitutional rights and has never killed a single human being.

But let’s take Senator Harris at her word; in the aforementioned interview, she insisted, “When you see the effect of this extreme violence on a human body, and especially the body of a child, maybe it will shock some people into understanding, this cannot be a political issue. We have to be practical.”

All right then, let’s look at what happens to a baby when it’s aborted.

Below there are diagrams of abortion procedures, but no actual photographs, as even I can hardly stomach looking at that horror or putting it on my website. Here’s one in an article on partial-birth abortions, and I’m sure you can find others fairly easily if you really want to “shock some people into understanding.”

Let’s start with partial-birth abortions, also known as “dilation and extraction,” wherein the baby (read: living human child with its own DNA) is partially delivered through the birth canal until its head gets in the way, at which stage the abortionist stabs the baby through the back of the head, vacuums out the child’s brains, causes the skull to collapse, and removes the baby-shaped tumor, deeming the operation a success.

Next up is dilation and evacuation, a slight variant of the previous process, whereby the clump-of-cells-with-a-unique-heartbeat-and-pain-receptors is arbitrarily snipped to pieces by an abortionist with a toothy clamp and the leech’s body parts are ripped from the womb one at a time until he (or most likely “she” in many cultures) has fully exited the birth canal.

You may notice that I employed varying levels of sarcasm throughout that discussion, as this is and ought to be an intensely difficult topic to discuss. It’s disturbing, horrifying, and disheartening.

But Senator Harris is right, even if in the wrong way. We cannot just stand by as babies are being slaughtered, and if takes brutally direct language and agonizing photographs to “shock some people into understanding,” then so be it.

Almost one million babies are murdered in the United States every year. If that fact is less viscerally disgusting to me than seeing a picture of a premature child, then that’s a problem I need to work on.