I Have One Concern with Justice Gorsuch 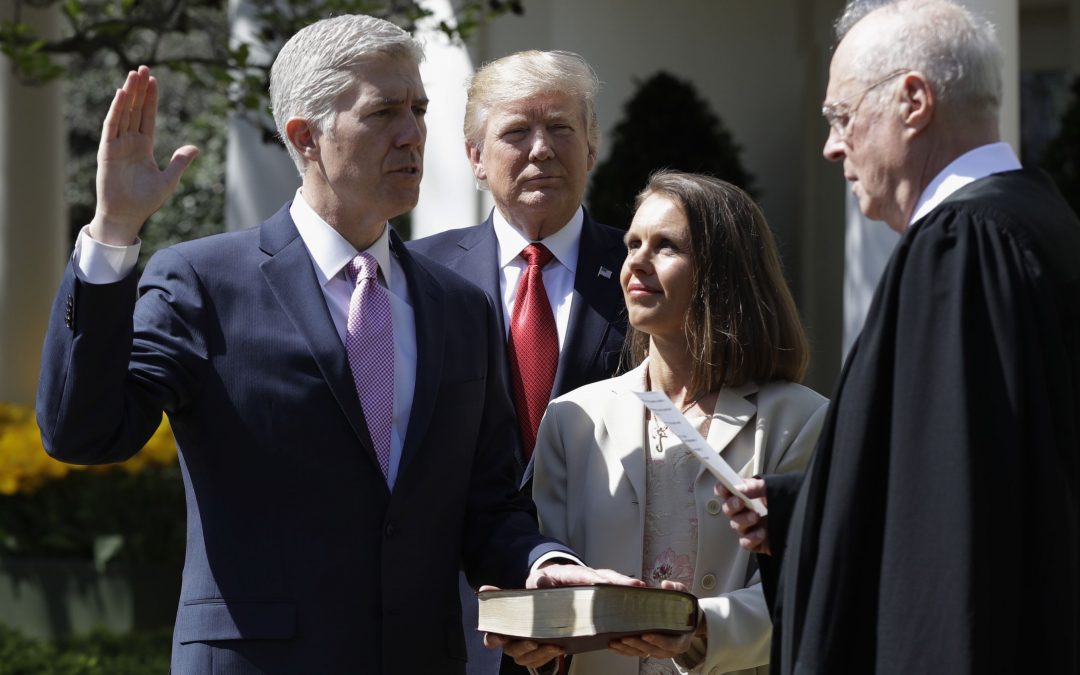 So far, Supreme Court Justice Neil Gorsuch has been a constitutional wonder boy, doing everything conservatives have expected and hoped for in his brief two months on the bench, and with Thursday’s investiture ceremony to swear in the 113th SCOTUS member, Gorsuch is officially here to stay.

Gorsuch began his tenure in April by denouncing the “linguistic somersaults” that legal professionals often use to bend the original meaning of written law, countering that he prefers “plain language.” Gorsuch’s colleagues also note his love and respect for the rule of law and the role of the judicial branch.

The originalist judge has honored both standards thus far in his service, receiving notable praise from Heritage Foundation senior fellow John Malcolm, who observed, “He writes opinions that are going to be interesting and comprehensible from legal scholars all the way down to your intelligent layperson.” Additionally, Leonard Leo, executive vice president of the Federalist Society, celebrated Justice Gorsuch as “someone who adheres to the text of laws because of a deep hesitation to extend the judicial power to choices that are best left to politicians and the people.”

Furthermore, Gorsuch’s words since his appointment can now speak for themselves, such as his recent characterization in a Harvard forum of the United States’ judicial system–and its freedom to rule against even the federal government–as “a blessing” and “a remarkable gift.” Not to mention his majority opinion written for the unanimous Henson v. Santander Consumer USA, Inc. decision, in which he engaged in a grammar lesson, adopted a literal interpretation of law, and affirmed that judges are to “apply, not amend, the work of the people’s representatives.”

I have no complaints about his record in the last two months, or really at any moment. That said, I still worry about an area in which he has yet to be officially tested, and his testimony on the matter–in my view–raises cause for concern: his possible conflation of case law with statutory law.

More precisely, will he be able to rule against precedent? This detail matters.

One of the greatest hopes that conservatives have for the Supreme Court is the eventual overruling of Roe v. Wade, the current case law which allows for the murder of babies under the guise of “choice.”

When asked during his hearing whether he would overturn this reprehensible precedent (my words, not theirs), Justice Gorsuch gave no such indication, and that’s understandable—Democrats threw enough of a fit despite Gorsuch’s clear lack of party bias, so imagine how difficult it might have been to push him through if he’d come out with a hardline stance on such a controversial (read: “evil”) issue. I should also clarify that Gorsuch remained impartial regarding every case about which he was questioned for the sake of propriety.

I’m okay with his toeing the line for confirmation’s sake, but I worry how genuine he was about his views expressed to Senator Feinstein regarding the Heller v. D.C. 2nd amendment case:

“It’s now a precedent of the United States Supreme Court. It’s binding. It’s the law. Whether we like it or not, it’s the law. … Whatever’s in Heller is the law, and I follow the law. It’s not a matter of agreeing or disagreeing. … It’s a matter of it being the law, and my job is to apply and enforce the law.”

I agree on his definition of the judicial job description, but not his characterization of precedent as law. Here’s the problem: “case law” (precedent) is not the same as “the law.” Laws are made by legislatures and they are binding. Case law is a characterization of court findings which establish—for the time being—how the law is to be understood, but, as I mentioned, this understanding is always subject to change.

Justice Gorsuch assured his understanding of that distinction during his confirmation hearing, noting that precedent “adds to the determinacy of the law,” implying their separate natures. But considering that he moments later repeatedly referred to Heller v. D.C., judicial precedent, as “the law,” will his respect for and reliance on precedent complicate his legal rulings, even when something is blatantly unconstitutional?

Heller v. D.C. is not the law, any more than Obergefell v. Hodges, the case which “legalized” same-sex marriage, is the law. I put “legalized” in scare quotes because it didn’t technically change the law. It merely established how we are to apply the law currently, but it lasts only until another case overturns that understanding or a piece of legislation establishes the law more permanently.

Said differently, same-sex marriage is not law, but it is allowed under law. That’s a small difference that gets enormous under certain circumstances. And until the legislature backs up the judiciary’s decision with an actual law, that decision is subject to swift change.

Just picture this: gay marriage is allowed right now, but say a federal employee refuses to grant a marriage license to a same-sex couple. There would obviously be a lawsuit, it gets appealed up the chain to the Supreme Court, and the SCOTUS interprets existing law differently, overturning the Obergefell precedent. Federally approved same-sex marriage now becomes illegal. Then a couple sues the government because they can’t get married, it gets appealed to the Supreme Court, and that SCOTUS rules in favor of the couple—gay marriage is reinstated.

How can this happen? It’s simple: the Supreme Court’s job is to interpret whether something is lawful, according to the law as it currently stands (somebody should tell Kennedy, for whom Gorsuch once clerked). Since Obergefell is the precedent, you might think it could stop an opposite ruling, but it can’t. Why not? Because it’s not the law; it’s only case law, not statutory law. Case law is significant, but statutory law is binding. The Supreme Court uses precedent for the ease of judging similar cases, but it is not legally obligated to uphold the rulings of previous justices, any more than the standing president is required to uphold every policy of his predecessors. The idea is absolutely ludicrous.

Some precedents were decided correctly, in my view, but that doesn’t mean they should remain in force solely because they are precedent. Instead, they should remain because they were correctly decided. So yes, it does matter whether a justice agrees with case law, not ideologically but legally, because it can be overturned instantly. A justice should uphold the law regardless of their personal beliefs, but they have every right to overturn a precedent based on their more enlightened understanding of the law.

We should thank God for certain justices who have overturned lousy precedents in years past, such as the despicable Dred Scott decision which classified slaves as property. Plessy v. Ferguson allowed for the unconstitutional “separate but equal” segregation of schools for almost sixty years before it was replaced by the Brown v. Board ruling, which was undoubtedly Constitutional and stands as precedent today. These civil rights would later become promoted from case law to statutory law under Title IV of the Civil Rights Act of 1964. This was the correct decision.

Any case—Roe v. Wade, Obergefell, whatever—should be able to stand on its own legs, not just because it is precedent but because it’s a good, lawful case. Only legislatures can legislate, despite the overreach we’ve seen in recent years, and case law is not the law.

Justice Gorsuch is amazing. He is a brilliant scholar and a tremendous judge. As such, he may very well understand this vital difference in practice far better than I’m giving him credit for. But until we have evidence of such, I will be optimistically skeptical of his appointment.