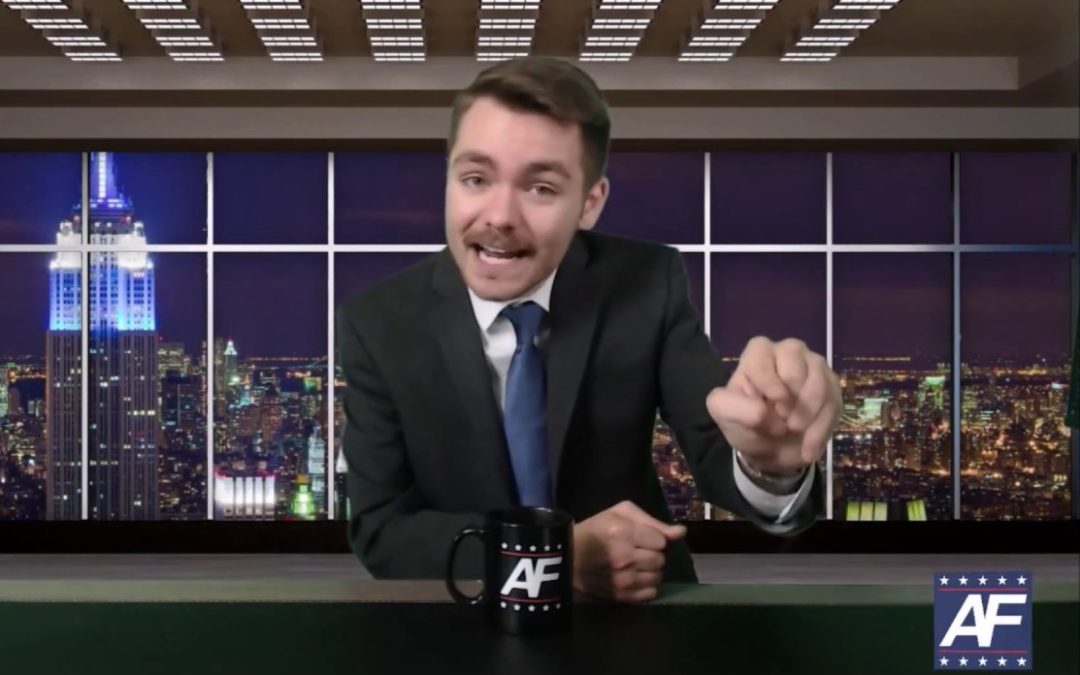 I’m going to start with a disclaimer that may seem odd, but I hope you will understand my intent. As I will discuss, what Groypers want more than anything is attention, which I have given them merely by writing this article. To mitigate any unnecessary spotlight on this repulsive movement, I will cite only minimally to Groypers’ content, especially where they can frame the movement on their own terms. Where I do link to Groyper content, I will do so primarily through sources providing commentary and context to the vile statements therein. If you wish to look them up on your own, you are free to do so.

And perhaps an unnecessary disclaimer to my disclaimer: I have never claimed to be an objective journalist. I am a biased fusionist conservative who openly disavows anti-Semitism and ethno-nationalism. You will not find an objective take on Groypers here.

That said, what is a Groyper? Born of a next-generation Pepe the Frog meme, Groyper identity is a rebrand of the Alt-Right, which, true to its name (alternative to the Right), was an extreme ethno-nationalist wing of the fascistic identitarian Left (Right and Left in American politics referring simply to the size of government an ideology supports, not what each group would do with that government). The Alt-Right has petered out over the past two years after the murder of Heather Heyer at the Charlottesville “Unite the Right” rally and the dying stars of provocateur Milo Yiannopoulos and white supremacist Richard Spencer.

Instead, Groypers now flock behind Nick Fuentes, host of the America First podcast on YouTube, a former associate of Richard Spencer, and an attendee of “Unite the Right.” Fuentes, who believes the Alt-Right needs to resurface under a new image, has stirred controversy by denying the Holocaust; calling interracial sex “degenerate”; saying Jim Crow was “better for us, better for them, better for everybody”; advocating the repeal of women’s right to vote; and labeling Matt Walsh of The Daily Wire a “shabbos goy race traitor” because he works for Ben Shapiro, an Orthodox Jew. Fuentes’s followers, who call themselves Groypers, proclaim the “catastrophic” dangers of demographic change, preaching ethno-nationalism, anti-Semitism, and a return to traditional sexual mores. Fuentes has stated that he considers the phrase “white nationalism” redundant, and he calls himself a Catholic Fascist after the model of Spanish dictator Francisco Franco.

Groypers have gained national attention most recently by infiltrating Q&A sessions hosted by speakers generally falling under a broad umbrella of conservatism: Charlie Kirk, Ben Shapiro, Matt Walsh, Steven Crowder, Representative Dan Crenshaw (R-TX), Jonah Goldberg, and Donald Trump, Jr. There, Groypers ask leading, argumentative questions designed to incite outrage, such as, “How does anal sex help us win the culture war?” posed to Charlie Kirk when he appeared with Rob Smith, a gay, black, conservative Air Force veteran. In other cases, these questioners will bring up the anti-Semitic conspiracy theory of the U.S.S. Liberty or ask the speaker why they will not publicly debate “Nicholas J. Fuentes, noted patriot and America First Conservative?” Groypers oppose any form of conservatism that welcomes non-white, non-Christian, or non-straight members among its ranks.

So now that you know who they are, the important question is, “What do they want?” That can be hard to pin down, as I will discuss, because of a wide array of members within the movement. But one thing they absolutely do not want to do is win.

They do not want to win politically, as their appeal exclusively to straight white Christian men demonstrates. In 2016, only one-third of voters were white men. In 2020, that number is projected to be even lower, as whites will only account for two-thirds of the electorate, and only 45% of voters are male. Factor in that Jews constituted 2% of voters in 2018 and 5% of the electorate identified as LGBT in 2012 — possibly higher today — and Groypers’ target audience is easily less than 30% of voters maximum. Assuming they can crunch basic numbers, they have no plans to win any office in any capacity.

Nor do they hope to win culturally, as their use of brash and openly racist language shows. Even the Alt-Right generally had the sense to disguise itself as mere conservatism concerned with rampant illegal immigration. Contrarily, Groypers directly invoke race, oppose even legal immigration, and openly embrace anti-Semitism. Their message will not win over many sympathizers in the culture wars either.

So what do Groypers really want? Obviously, like any radical group, they want attention as a means for forwarding other goals. Here they have undoubtedly succeeded, though it becomes conservatives to — where possible — provide this movement with little to no oxygen. Beyond attention, as far as I can tell, Groypers pursue three principal goals, not necessarily shared by all members but frequently manifested across the movement:

First, Groypers find sympathizers, if not outright supporters, among the more extreme wing of anti-immigration conservatives and nationalists because they are at least willing to “go there” in their rhetoric. Such sympathizers include Michelle Malkin, Lauren Chen (a.k.a. Roaming Millennial), and Denise McAllister of “You were at my wedding, Denise!” fame. When criticized for defending white supremacists, these advocates cite to “cancel culture” and proclaim that we cannot silence free speech, brazenly misunderstanding that a private decision not to listen or lend a megaphone to ugly views has nothing to do with a government crackdown on unpopular speech.

To be clear, Michelle Malkin et al. might not necessarily be white supremacists, although Malkin has called Nick Fuentes a “patriot” and “truth-teller,” and non-white people can be racist. For the most part, I believe those who glom onto Fuentes and his ilk see an opportunity to fight back against the political correctness that so often seeks to vilify even mainstream conservative talking points. If society (not government, but individuals making individual choices) can tolerate Fuentes’s views, then the new Overton Window would certainly allow for Malkin-types. For nationalists seeking to make a name for themselves, if that means defending repulsive ideologies and avatars, so be it.

In response, we must remind people that there is a difference between political incorrectness and being a jerk. You can spread unpopular truths (e.g. men are not women) without spewing radical filth (e.g. women should not vote). We have endured so many years of protesters at conservative speeches on college campuses that many can no longer tell the difference between what Ben Shapiro says and what Michelle Malkin propagates. Thankfully, Young America’s Foundation can still distinguish the two and respond accordingly.

Next, you will encounter perhaps the most challenging element to shut down: the true believers. I believe there are many within Fuentes’s ethno-fascist groundswell who genuinely fear the natural extinction of the white race. They’re loony and vile, but they exist, especially at grassroots levels. Among leaders, one might find trouble distinguishing who is in it for the clicks and who wishes to die with fourteen words on their lips, and perhaps there is an element of both. Either way, the only response to this faction is to starve them of oxygen. Don’t engage with them, call out their bigotry, and do not provide them a platform. If they are given a platform, remember that shedding light on their despicable views does not make you one of the Left, but also remember to be careful in your approach lest people mistake you for using Leftist tactics. In all cases, educate.

Finally, what I believe to be the truest Groyper fantasy, to shut down conservatism as we know it and make way for their own ethno-state. Aside from a few remaining conservative/libertarian defenders, there is practically no one seeking to shrink or even preserve the size of government. All vehicles now point to totalitarianism, and warring tribes merely debate gas mileage. The longer Groypers falsely identify as conservatives, the more likely they will taint the name forever and dispose of freedom’s last fighters. If conservatism can become synonymous with Nick Fuentes, than there is no hope for a restoration of Buckley-style conservatism in the 21st Century. As a result, Groypers will merely have to fight over who holds the reins of an authoritarian state, leading to the fascism of their choice. This is a long game, but conservatives make it shorter by breathing life into this ideological wasteland.

In short, Groypers don’t want to win — yet. All they want is to tear down the Western world in a stroke of postmodernism for white nationalists. Then they can rebuild, and conservatives won’t be there to stop them. That means we have to now.