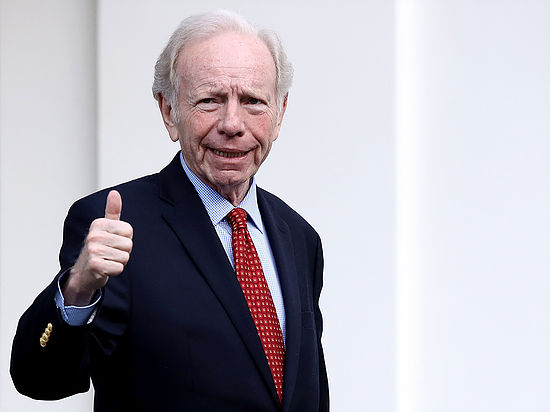 After a few weeks of friendly fire and general foolishness, President Trump finally made a smart move: reveal someone who doesn’t like him as his potential top pick for FBI Director. One might think this would help subdue allegations from the Left that the GOP is politicizing the FBI and that Trump fired Comey in hopes of quashing investigations regarding Russian collusion.

But of course it didn’t.

Trump announced on Thursday, May 18th that retired senator Joe Lieberman (I-CT) has a real shot of replacing James Comey as the head of the Bureau. This would be perfect. Lieberman endorsed Hillary Clinton in the 2016 presidential election, so we know Trump isn’t his favorite, and he’s about as fair-minded as they come on the left side of the aisle.

He ran as the vice presidential candidate in 2000 on the Al Gore ticket, lost to John Kerry in the Democratic primary of 2004, and won re-election in Connecticut in 2006 on a third party ticket: the “Connecticut for Lieberman” party.

Lieberman sponsored the repeal of “Don’t Ask, Don’t Tell,” played a fundamental role in the creation of the Department of Homeland Security after 9/11, and opposed major tenets of Obamacare. He also endorsed John McCain in 2008, warned against Obama’s Iran Deal and rejected expansions on Medicare. He left the Democratic party in 2006 and became an Independent senator, serving until 2013.

Needless to say, Lieberman has spent time on both sides of the Senate floor. He and I wouldn’t agree on everything, but anyone can see that he puts principles above party.

Lieberman is the epitome of compromise.

But the Left hates compromise.

Many Democrats in the Senate are claiming opposition to Lieberman’s potential nomination due to his inexperience. “We ought to stay away from political figures,” says Senate Minority Whip Dick Durbin (D-IL). “Stick with the professionals.” But is Lieberman unqualified?

He obtained his Juris Doctor from Yale Law School in 1967, served as the Attorney General of Connecticut, and sat as Chairman of the Senate Homeland Security Committee. Sure, there are likely people more qualified than Lieberman, but it is intellectually dishonest for the Left to claim outright inexperience.

This has nothing to do with professionalism. This is because the modern Left is fascism incarnate, and Lieberman doesn’t conform to 100% of the Left’s agenda. That agenda allows no compromise, and neither should ours.

We’re all familiar with the idea that right and left are both necessary to keep us centered, but that’s only beneficial if the middle contains absolute truth and moral excellence. It only works if right and left propose different approaches yet share a common goal.

This is not the case in American politics. The Left makes no attempts to conceal its platform of cruelty, bigotry, and tyranny. The Left romanticizes the evil practices of elective abortion and socialism as major elements of its agenda, and it fully supports discrimination against Christians, Jews, whites, law enforcement, and anyone who disagrees with them on any philosophy. The Left condemns the Founding Fathers, ravishes the Constitution, and demoralizes its loyal followers. The Left allows no room for conversation.

In order for efficient compromise to occur, it would have to exclusively involve those who support Western values and the inalienable rights endowed by our Creator and protected by our founding documents. Compromise happens when two or more groups who believe in a common goal or principle discuss the most practical solution to achieve such a goal.

For example, both conservatives and libertarians (classical liberals) believe in a protected right to bear arms, yet they might differ in ideas about the process of obtaining firearms; the permits required; open vs. concealed carry; and possible restrictions on felons, disabled persons, etc. Compromise would be achieved through a sincere discussion of the pros and cons of each scenario based on virtue, efficiency, and a determination to protect individual liberties.

Compromise would not be achieved if one group sought to deny this fundamental right altogether. Compromise is not saying, “You can have a little bit of your right.”

There is compromise to be found in many political spheres, but not with the Left. We will not find suitable, moral compromise among those who declare opposing viewpoints “hate speech” and violations of free speech. We will not find efficient, virtuous compromise with those who see racism, sexism, and Islamophobia in everything, labeling them “institutional” because they can’t find any concrete examples.

As Ben Shapiro maintained during the election, “If you sacrifice principle for victory, you end up with neither principle nor victory.”

The recent Congressional budget and the American Healthcare Act are not victories for the American people nor the Constitution. No, Mr. President, I’m not “tired of winning.” Other than Neil Gorsuch, I have yet to see a single major victory for conservatism since the election.

In fact, since Ronald Reagan, we have yet to see true conservative leadership in government.

The time for compromise has long passed. We compromised as a country throughout the 20th century, allowing the rise of progressivism. Our compromises within the Republican party have led to a House of RINOs and a lifelong Democrat masquerading as the savior of the Right.

As conservatives, it is our duty to stop compromising our principles until they are all but gone.

Mr. President, hire an honest man or woman as FBI Director and get on with the investigation. If you’ve done nothing wrong, you should have nothing to fear. You won’t get Democrats to back you, but that didn’t stop you from nominating Justice Gorsuch. Do the right thing anyway.

Stop listening to those who want to “fundamentally transform”—code for “destroy”—America, on either side of the aisle.

Stop selling out and start rebuilding America with its divinely inspired foundation. You might not recognize it at first—it’s been a while since we’ve seen it—but I promise you it’s there if you’re willing to stay strong.