Feinstein to Kavanaugh: How Can You Reconcile Justice with an Unjust World? 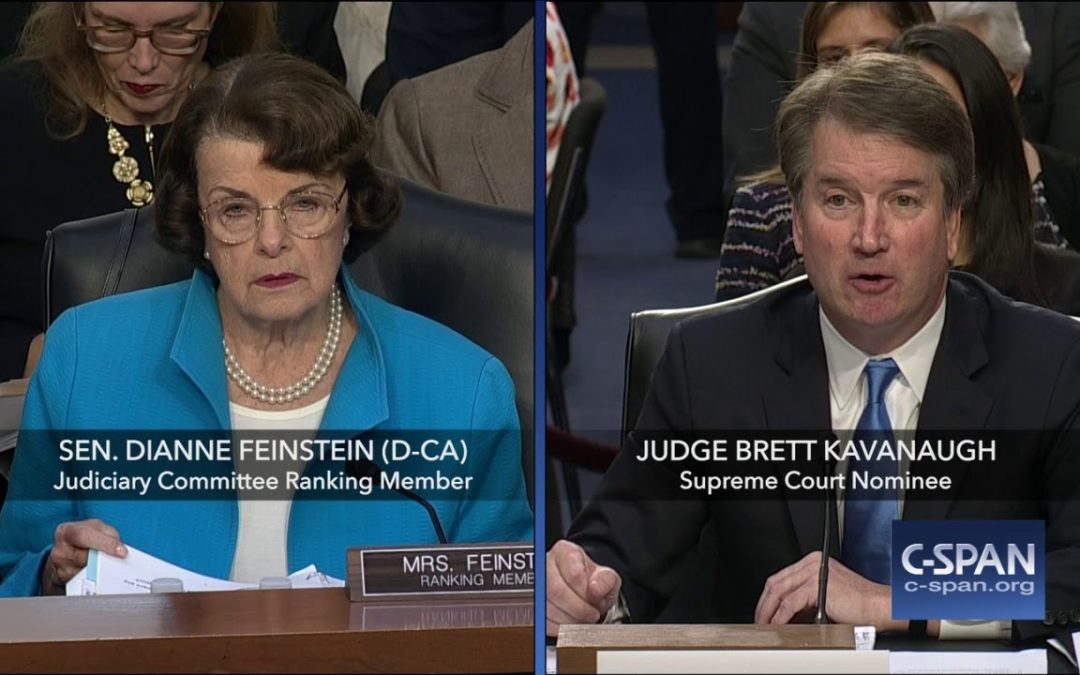 We’ve finally reached the end of the Senate confirmation hearings for Supreme Court nominee Brett Kavanaugh (thank goodness), and if you’ve been paying attention to any media whatsoever, Left or Right, you’ve likely heard soundbites from one of my senators, Kamala Harris, grilling Kavanaugh on a number of issues that we won’t get into here.

But one thing that’s receiving admittedly some but considerably less attention is the comments of my other senator, Dianne Feinstein, regarding gun control and, more generally, the role of the judiciary. She confronted Kavanaugh with the issue of D.C. v. Heller, in which the Supreme Court found a federal ban on handguns to be unconstitutional (later applied to the states through McDonald v. Chicago). One year after McDonald, the D.C. Circuit Court of Appeals, where Judge Kavanaugh has served for the past twelve years, was presented with a case known as Heller ii, which addressed a ban on certain types of semi-automatic rifles. In a lone dissent, Judge Kavanaugh stated simply that he did not see, in a legal sense, how he could distinguish between an unconstitutional ban on semi-automatic handguns and the ban on semi-automatic rifles before him. So, applying the precedent that was binding to him and mandated by a higher court, Judge Kavanaugh found that the latter ban was likewise unconstitutional.

When Senator Feinstein pressed the judge on his decision, Kavanaugh insisted that he was merely applying the precedent that was binding on him as a circuit-level judge. This is in accordance with the basic structure of the judiciary. The Supreme Court says it, and the lower courts must obey, whether they agree with the holding or not.

However, Senator Feinstein seemed to take issue with this justification, commenting:

This is an appalling suggestion — that instead of applying the law, the Constitution, and binding precedent from the Supreme Court, that a circuit judge should simply feel the gravity of the situation and decide based on their own ideology to advance a gun control agenda by any means necessary, laws and Constitution be hanged.

I wrote a few weeks ago about one difference between liberals and Leftists when it comes to the Constitution. Liberals, at least in lip service but I’ll give them the benefit of the doubt, swear by the Constitution but interpret it differently than conservatives do. Leftists disregard it wholesale.

Dianne Feinstein is a Leftist. What she just said (or at least heavily implied) is that regardless of the constitutionality of the issue, you must see the horror that are these mass shootings and therefore you must put aside the Constitution, put aside binding precedent, and apply what you want to be the law.

Now, there are plenty of elements of her statement that I could unpack — “hundreds of school shootings” is not the case; it’s more like seven. Matt Christiansen already debunked these factors pretty well.

I’m actually going to take her question at face value. Senator Feinstein is not a lawyer, she’s not a judge, and what she’s really asking is at the very heart of the judiciary and the role of judges, which is: how can you set aside your personal feelings in order to apply the law fairly? Honestly, that’s a difficult task. It’s hard to do, and as I study to become a lawyer, I know I’ll have to do that many times in my career. I’ve already seen my classmates asking professors whether they’ll have to abandon their notion of right and wrong to be a lawyer — how can you decide something one way when you so desperately want it to go the other? Do you have to lose yourself and your dignity? It’s hard knowing you’ll have to make decisions that you wouldn’t otherwise want to make.

But the answer to how you reconcile that — how to reconcile what the Constitution says when you see horrors in the world that you could stop by abandoning the Constitution — the answer is a commitment to freedom. A free republic requires justice, justice requires due process, and due process requires that you set aside your personal feelings and uphold the law. This notion is as central to the American creed as any other.

I have always admired each of the Founders, but as a kid I was immediately drawn specifically to John Adams, before I knew anything about his presidency, his policies, his quotes on the importance of morality in America, or anything else, because I learned about his legal defense of British soldiers in the aftermath of the Boston Massacre, in which a mob attacked the soldiers, who fired on the crowd and killed five Bostonians. John Adams took the unpopular position that even these men deserved due process. He defended them in court, and they were found not guilty. That is the mark of a man of honor — that he can defend someone who is his enemy, that he can fight for a result he does not personally favor, because of his commitment to due process, justice, and freedom.

Antonin Scalia once said that one of the judicial decisions that hurt him the most, that he wished he didn’t have to make, was to a return a Native American child, who had been placed for adoption by the child’s mother with a non-tribal family, back to the tribe because the tribe’s laws clearly indicated that a child could not be placed for adoption without the approval of the entire tribe. Instead of honoring the dying wish of these parents that their baby go to a family whom they loved and trusted, this child was placed under the custody of others. This was a tragic case — no one wanted to see it happen. But that’s what the law said. And Justice Scalia, a man of honor who was committed to due process, justice, and freedom, knew that he had to set aside his personal feelings.

In the same interview, Scalia reaffirmed what Justice Holmes had once said, that the job of a judge is not to do justice but to apply the law, and I would add that in so ruling, as everyone fills their role properly, justice occurs naturally. But when a judge takes it upon himself to decide what justice means in one case or another and unilaterally push the law in that direction, we find something else entirely.

A judge must apply the law without passion and without prejudice. In doing so, we still get justice but as natural result of due process. But we don’t manipulate or manufacture justice.

Maybe that results in “unfair” cases that we see and think, “That can’t be right.” It is cosmically unfair when a bad guy gets off the hook, so we long for cosmic justice to emerge and dole out a due punishment. If you believe in God, like I do, you believe that justice will eventually come, and necessarily so because we can’t punish every single wrongful act — not even every unlawful act because there’s not always enough proof and it’s more important to protect the innocent than to catch every bad guy with a wide net.

But if you don’t believe in God or do want cosmic justice now, then what you actually want is for government to play God, and that’s more terrifying to me than any amount of gun violence. That’s 20th Century Communism, which resulted in well over 100 million deaths across the world.

So how do you reconcile between what you want and what the law demands? It’s difficult, but it’s done with honor, integrity, and a commitment to keeping America free. And if there are changes to be made, legislators like Dianne Feinstein should do their job and take care of it instead of looking for someone to blame.