Booker and Pompeo: The Left’s Blindspot between Morality and Legality 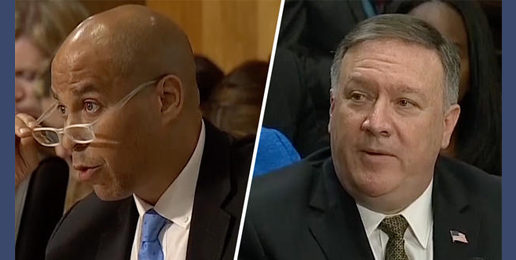 Article VI Section 3 of the US Constitution states, “No religious Test shall ever be required as a Qualification to any Office or public Trust under the United States.”

But between Dianne Feinstein, Bernie Sanders, and Cory Booker, you wouldn’t know it.

In doing so, however, Senator Booker committed an error highly common among the Left when criticizing traditional religious values, failing to distinguish between morality and legality.

“I am deeply saddened by the Supreme Court’s ruling that imposes legalized gay marriage on the 70 percent of Kansans who voted to honor and protect the traditional definition of marriage as the union between one man and one woman. It is a shocking abuse of power. It is wrong. I will continue to fight to protect our most sacred institutions.”

Notice here that then-Representative Pompeo made no mention of religion in his statement — only the law. The people of Kansas voted and the Supreme Court unlawfully reversed the outcome. This is a violation of the 10th Amendment, an example of judicial tyranny, and, in Pompeo’s words, “a shocking abuse of power.”

But with no distinction, Booker segued from this legal commentary to a moral position, namely Pompeo’s stated belief that homosexuality is a perversion:

Booker: “Is being gay a perversion?”

Pompeo: “Senator, when I was a politician, I had a very clear view on whether it was appropriate for two same-sex persons to marry. I stand by that.”

Booker: “So, you do not believe that it’s appropriate for two gay people to marry?”

Pompeo: “Senator, I continue to hold that view.”

Many news outlets have stopped the conversation here, concluding that Pompeo thus believes that gay marriage should be illegal, which is not even remotely what he said.

His statement was moral, not legal. But watch what Booker did next:

Booker: “So, people in the state department, I met some in Africa, that are married under your leadership, you do not believe that should be allowed?”

That is a legal question. “Appropriate” and “allowed” are two massively differing umbrellas, yet Booker maneuvers between the two as if they were interchangeable.

Pompeo: “We have, I believe it is the case we have married gay couples at the CIA. You should know. I treated them with the exact same set of rights –”

Booker: “Do you believe that gay sex is a perversion, yes or no?”

Booker’s game is either malicious trickery or shameful ignorance. He asked a legal question, Pompeo gave a legal answer, and Booker switched right back to a moral question.

Pompeo: “I’m going to give you the same answer I just gave you previously. My respect for every individual, regardless of their sexual orientation is the same.”

Pompeo finished this bout by returning to legal territory, where his case is more mainstream and thus tenable in a Senate hearing. Booker, however, chose to emphasize the moral position in his closing thoughts:

“Your views do matter. … I do not necessarily concur that you are putting forward the values of our nation when you believe there are people in our country that are perverse.”

This discrimination is purely religious and is not at all steeped in law. By Pompeo’s own testimony, he will uphold the law as it currently stands. But that’s not enough — the Left cannot tolerate deviant thought.

Most religious people do not believe in legislatively outlawing all behaviors they consider sinful. We don’t want to criminalize violations of the Sabbath, adultery, coveting, or polytheism. We don’t seek to ban miniskirts, R-rated movies, or profanity.

Several government officials are Mormon, yet I don’t recall fearmongering that they would seek a national coffee confiscation.

Many religious people are ardently in favor of legalizing recreational marijuana. I happen to not be one of those people, as I’ve previously written, but my reasons are not religious.

And finally, religious people broadly do not support criminalizing homosexual activity generally, and growing numbers no longer oppose the legality of gay marriage specifically. Those who do, moreover, often have non-religious justification for doing so. I personally don’t believe the state should be involved in marriage at all, including heterosexual civil marriages, as I don’t consider the state to have the authority to perform a religious sacrament. It’s as paradoxical to me as a civil baptism, civil communion, or a civil anointing of the sick.

In a sense, separation of church and state applies to individuals as well. There is a gap between what I believe is morally good and that which I believe ought to be legal.

But that’s not good enough for the modern Left, whose church IS the state, and thus any political dissent is heresy.