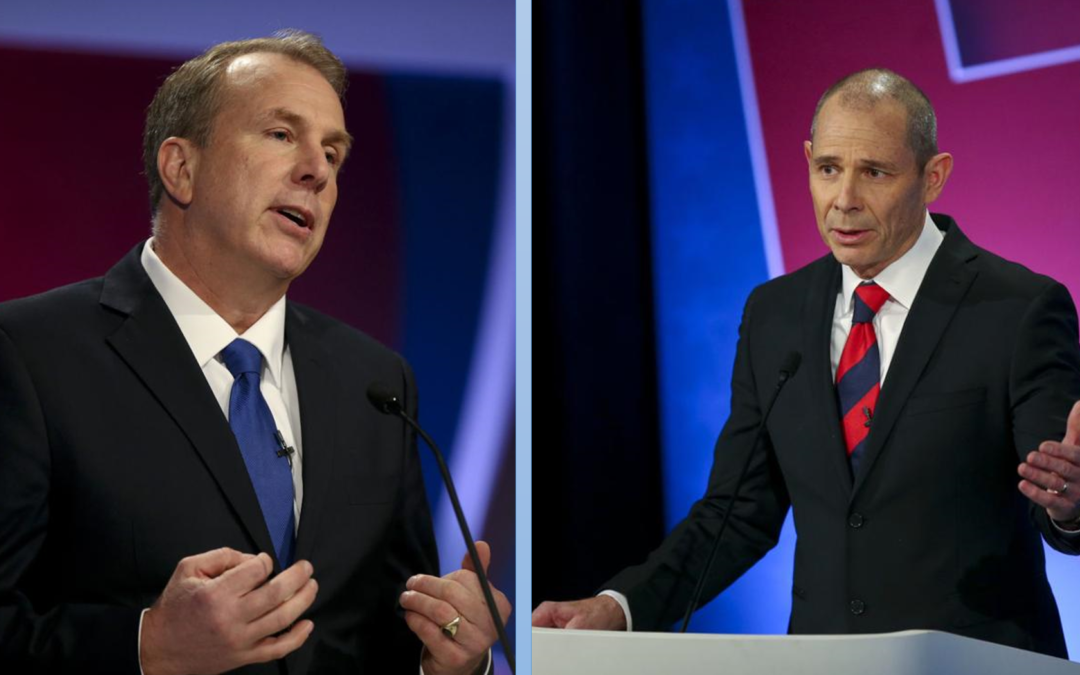 On Tuesday, Representative John Curtis and former state legislator Chris Herrod squared off in a primary debate for Utah’s 3rd Congressional District. This race is a rematch of last year’s special election in which Herrod won at the GOP convention but ultimately lost the seat to Curtis in the primary.

Undeterred by accusations of mudslinging, Herrod dug into Rep. Curtis’s 43% F rating on Conservative Review’s Liberty Score, a site which Curtis at one point referred to as an “extremist blog” when confronted about his procedural vote on the most recent omnibus bill. Throughout the debate, Herrod branded himself as the only true conservative in the race, to which Rep. Curtis finally objected near the end:

The low-hanging fruit here is obviously that Curtis can’t even pronounce the name of the ideology in question, but he makes an absurd leap in logic, flippantly misrepresenting Herrod’s statements. No one ever said that only conservatives love the Constitution and the country, or that conservatives love the Constitution and the country any more than many libertarians, moderates, and liberals. I don’t know any conservatives who even think that. Obviously people of varying ideologies can have the same goal of securing a better future for this country, and they can share the same love for our founding documents despite holding differing interpretations of them.

Now, there is still objective truth to what the Founders meant by what they said, and not all views are right — even those which claim to be based on the Constitution. For instance, if you’re a liberal who loves the Constitution, I think you misunderstand it. But that doesn’t mean you don’t love it, and Chris Herrod never suggested otherwise.

Curtis continued, “You know, I suppose from an extremist view, everybody’s a moderate.”

This is gross. Leftists use this tactic frequently to paint anyone outside of their bubble as being far right. Not only is it cheap, but it’s also nonsensical. What is an extreme conservative? Either you believe in conservatism or you don’t. It’s like saying someone’s an extreme Jew because they’re Orthodox, or an extreme Vegan because they don’t have cheat days. Do you actually believe what you claim to believe or don’t you? Staunch, devout, avowed, committed — these terms are all acceptable. But an extreme conservative? It makes no sense. Unless Curtis is claiming that all conservatives are extreme, in which case he definitively outed himself as a Leftist.

Herrod countered, “My frustration is that we can’t be honest. That’s fine if you’re a moderate or a liberal. That’s fine. Just own it.”

Curtis deflected, returning to his strategy of maligning Herrod as self-righteous: “So Chris, why is it that you get to define conservativism [sic]? And how is it that you own some moral high ground in saying, ‘I’m the guy and nobody else is unless you pound the pulpit like I do, unless you rant from the mountaintops,’ then all of a sudden we’re not good enough for you?”

Again, Curtis needs to learn how to pronounce “conservatism,” but this attack is clever and all too common among phony conservatives. Curtis is implicitly accusing Herrod of invoking the No True Scotsman fallacy, wherein a person claims that anyone who disagrees with them on a particular point isn’t really a part of their group — for instance, that no true Scotsman prefers pants to a kilt, or that if a Mexican doesn’t enjoy spicy food then he’s not really a Mexican. Applied appropriately, pointing out this fallacy can be entirely valid — a person’s personal taste in fashion or cuisine doesn’t disqualify them from their nationality — but often moderates or liberals masquerading as conservatives will cite this principle at the expense of objective truth. If a person is born in Ireland to Irish parents and never once leaves the Emerald Isle, then you can easily say that that person is not a true Scotsman.

Conservatism is an established ideology. It is based on certain principles and not others. Conservatism advocates for a small, balanced government that secures natural rights, ensures economic freedom, and preserves Western Civilization. If you don’t believe in these things, that’s fine, but you’re not a conservative. A registered Democrat is not a Republican, and someone who forwards socialist policies is not a conservative. This is not a fallacy; it is, by definition, objectively true.

As I’m sure you can see, this description allows for some wiggle room in certain policies, such as the proper use of the military (paleoconservative isolationists vs. neoconservative interventionists) or the most efficient and appropriate form of taxation (such as a flat income tax or a consumption tax). Not all conservatives agree on every aspect of government, but they are consistent in their philosophy that no government action ought to violate the natural rights of its constituents or restrict economic liberty. If not, then that person is not really a conservative, any more than a baptized Catholic is really a Lutheran.

But many seem to find ideological definitions trivial, especially in a state like Utah where Democrats often run as Republicans in order to win. Ideology is rejected in favor of political identity, and you can identify as a member of any group you want.

This is how Sen. Orrin Hatch can boast a Liberty Score lower than Ted Lieu and Kamala Harris yet still be championed as a Republican hero and how Rep. Mia Love, who has voted to fund Planned Parenthood on several occasions, can brand herself as the dependable pro-life candidate.

One doesn’t need any moral high ground to recognize the boundaries of an ideology any more than it requires moral fortitude to acknowledge the borders of Alabama. I imagine John Curtis hasn’t been campaigning in Rob Bishop’s district — where does he get off claiming some moral high ground by not holding a town hall in Vernal?

All that’s required is the intelligence to understand the words coming out of your own mouth. Either John Curtis is lacking, or he is deliberately lying to the people he was elected to represent.

But I described his earlier tactic as “clever,” and it is. Notice that in all of his statements and accusations against Herrod, Curtis never once claimed to be a conservative. By deflecting questions and feigning indignation, he successfully implied that he subscribes to a branch of conservatism different from Herrod’s without ever having to utter the words and thus box himself into an ideology he clearly doesn’t share. He protects himself from future liability, but the impression of conservatism has been given, and now people think that Curtis is conservative — a more compassionate, open-minded kind — even with zero knowledge of his record and positions, which is exactly how he wants to come across.

I often remember one of Curtis’s staffers telling me in 2017, “John’s a conservative, whatever that means.” This is transconservatism at its finest.

Never mind an F rating from Conservative Review, or his hopes for Medicaid expansion (he called Utah’s growth of Medicaid “amazing” during the debate, saying that Utah was “bold enough to say no at first and turned away a lot of government money” before doing “the right thing” by propping up entitlement programs). He can be a conservative if he wants to be, whatever that means.

Never mind his plans to require guns to be sold with a safety device, his proposal to ban veterans between ages 18-20 from buying any type of firearm, and Provo law prohibiting the discharge of a gun in self-defense. He identifies as a conservative! (Whatever that means).

Curtis complained during the debate that he is often blamed for problems in Provo that were already present when he assumed office, but if he did nothing to remove them, then he shares the blame, just as President Trump will be held accountable if he fails to fight for the full repeal of Obamacare, successfully or otherwise. However, after playing the “that was before my time” card regarding BRT, Provo’s infamously ineffective Bus Rapid Transit system that required a $75 million federal loan and $200 million of taxpayer money, he accepted credit for the action and said that it was his pleasure to continue the project, noting, “It’s a good project. And it’s necessary for our area.”

Disregard all that. Never mind that he raised taxes in Provo by 40%; that his definitive accomplishment as Mayor is the total monopolization of internet providers in the city; that he refused to stand with conservative icons like Jim Jordan, Mark Meadows, and Raul Labrador on the omnibus because to do so would’ve been exactly what Nancy Pelosi would’ve wanted; or that his hero in fighting the gender pay gap that has been debunked countless times is Pat Jones, a Democrat and former state senator with a Libertas rating of 45%. Confound it, he’s a transconservative! And if you don’t accept his identity, then you’re a bigot.

In fairness, Chris Herrod wasn’t up to his usual standards on Tuesday in defending conservative thought. At varying markers in the debate when providing evidence of his conservatism, Herrod said, “I’m a platform Republican” and repeatedly emphasized, “I support the Trump agenda.” Conservatism is about philosophy, not personality, and it is much bigger than President Trump. Conservatism is based on principles, not a party platform. I know Herrod knows this, but that’s not what he said in the debate, so I have to be fair.

But Herrod has been consistently conservative in action, if not entirely in rhetoric on Tuesday. Curtis has been neither. But will it matter to voters? Sadly, I don’t think so. In Utah, it’s not about who you are or what you represent — it’s how you identify.