Too Many Catch 22s in Charlottesville, and It Feels Familiar 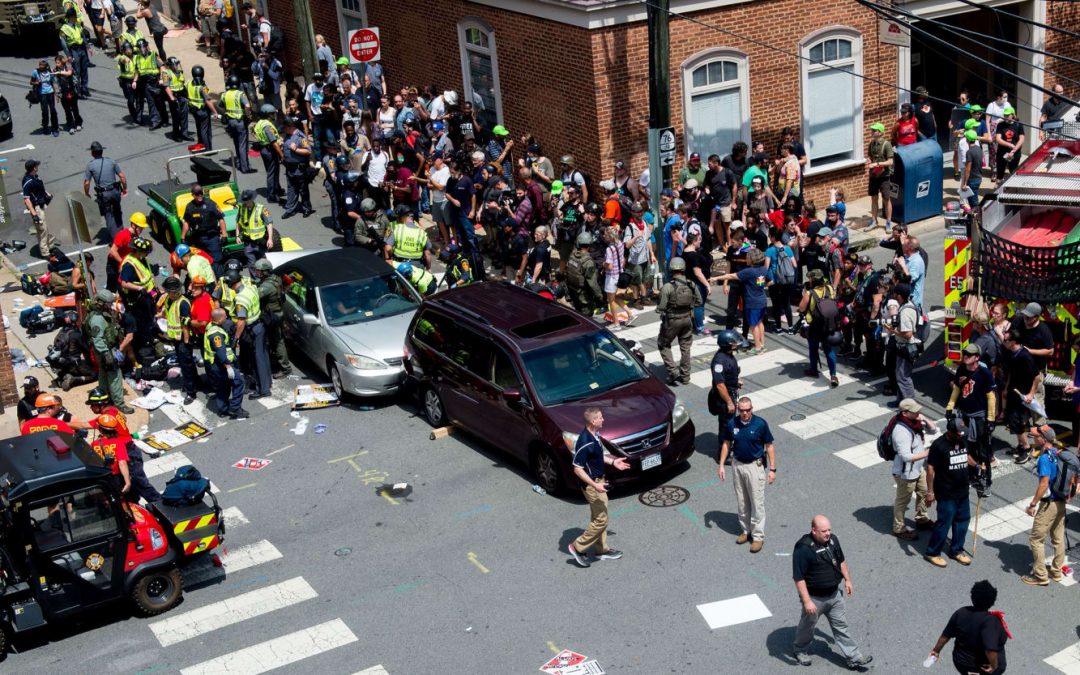 I have a long-standing policy that when two parties with which I disagree face off against each other, I step aside, let the situation play out, and avoid the crossfire. But with one dead and 19 wounded after a car rammed through protesters during a white supremacist rally in Charlottesville, VA, I can’t do that right now. I can’t choose to be silent when people are dying, and I can’t ignore the fact that just as we negotiate nuclear war with North Korea, a civil war is breaking out in America.

But how do I choose a side when one group is Antifa and the other is neo-Nazis and the KKK? Which of them is less wrong?

The rally began in opposition to the removal of a statue of Civil War General Robert E. Lee. I won’t advocate for the erasure of history; I’m not a fascist book-burner. I won’t call for the crucifixion of a man who, although I ardently disagree with his position, offers an unparalleled depth of humanity to one of the darkest periods in American history.

But I also can’t publicly defend the preservation of the statue because I know I’ll be lumped in the white supremacists who genuinely don’t understand the character of General Lee and his positions on race. It’s not about truth anymore; it’s about tribalism. Gone are the days when you could think someone a fool 90% of the time and agree with them the other 10%.

Lastly, I can’t defend the actions of the white supremacist who mowed over more than 20 people. But on the other hand, I won’t pretend that his violent actions implicate the entirety of his allies as being equally violent — it’s possible to peacefully promulgate a filthy ideology.

The KKK is evil. Antifa is evil. Racism is evil. Dismantling the truth is evil. I don’t want to pick either faction, instead condemning violence, bigotry, and fascism from either group.

If that sounds familiar, it should. It’s been our country’s mantra for over a year now when faced with the abhorrent choice between Donald Trump and Hillary Clinton. I refused to take a side then, just as I’m doing now, but I didn’t get off easily for that last year.

So to everyone who called me and anyone like me a sellout, a fool, a Nazi, a cuck, and even a traitor to my country for refusing to vote for either leading candidate, I’m not letting you get off now.

I’m looking at you, Sean Hannity. And Dennis Prager. And Rush Limbaugh. And Tomi Lahren. And Milo Yiannopoulos. I’m not saying you caused this violence; I’m not saying Trump caused this violence. But since it’s before us, I’m making you choose: which is the lesser of two evils? Which side will you defend, sycophantically and nauseatingly, no matter what they say, do, or promote? I know you’re capable of rationalizing your groveling at the feet of a repugnant character — do it again. Because if you don’t, aren’t you’re a traitor to your country? How can you refuse to pick a side when people are dying? Do you just want people to die?

It’s not so fun when you’re being backed into that corner, is it? But how can you justify neutrality now when you consider it gross wickedness to do so regarding Trump?

No more pointing fingers. Own up to your hypocrisy and take a side — not between the KKK and Antifa, but between having principles and backing the winning side at all costs. If you can’t figure out for what you stand, you’ll never know for whom you stand.