That Ye May Not Be Deceived: Trumpcare’s “Repeal” of Obamacare 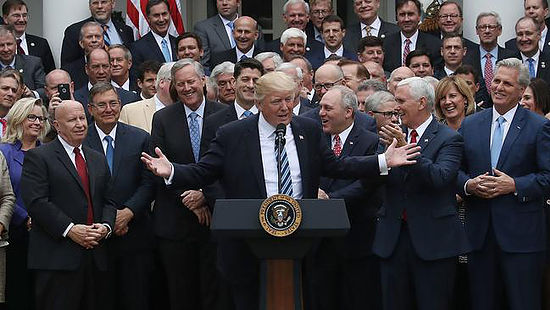 May 4th, House Republicans gathered at the White House to announce and celebrate their passing of the American Healthcare Act, President Trump’s first major legislative victory as president of the United States.  President Trump glowingly declared, “And this is a great plan. I actually think it will get even better. And this is, make no mistake, this is a repeal and a replace of Obamacare, make no mistake about it. Make no mistake…Yes, premiums will be coming down. Yes, deductibles will be coming down. But very importantly: It’s a great plan.”

Let’s dive into this bill that is purportedly designed to “repeal and replace” Obamacare and talk about what it does, the effects, and then give it a grade.

What does Trumpcare do?

What effect will Trumpcare have?

With the majority of the cost driving Obamacare regulations intact, especially the pre-existing conditions mandate, this bill will have no real effect on rising premiums and deductibles, in fact premiums and deductibles will continue to rise, the control of the Federal government over the supply and demand of healthcare will increase, unconstitutional Federal expenditure for healthcare will increase, subsidies that increase prices will increase and expand, and a new slush fund for insurance companies to guzzle money will be created.

As Mark Levin put it, this bill only repeals about 10% of Obamacare, leaving the majority of it intact.  This will result in higher premiums and deductibles, less economic freedom, more government spending, and bigger government.  So no, Mr. President this does not “repeal and replace” Obamacare, it tweaks and expands Obamacare.

This bill receives a D-.

It’s a little better than Obamacare due to increased power to the states to opt out of some regulations, but fails to repeal Obamacare in any real way.  The regulations that keep costs increasing remain, spending and subsidies increase, and the Federal government continues to grow.  Only a free market system will be able to revitalize this important market, and simultaneously increase healthcare quality and lower costs.