Life Will Win if Women Lead 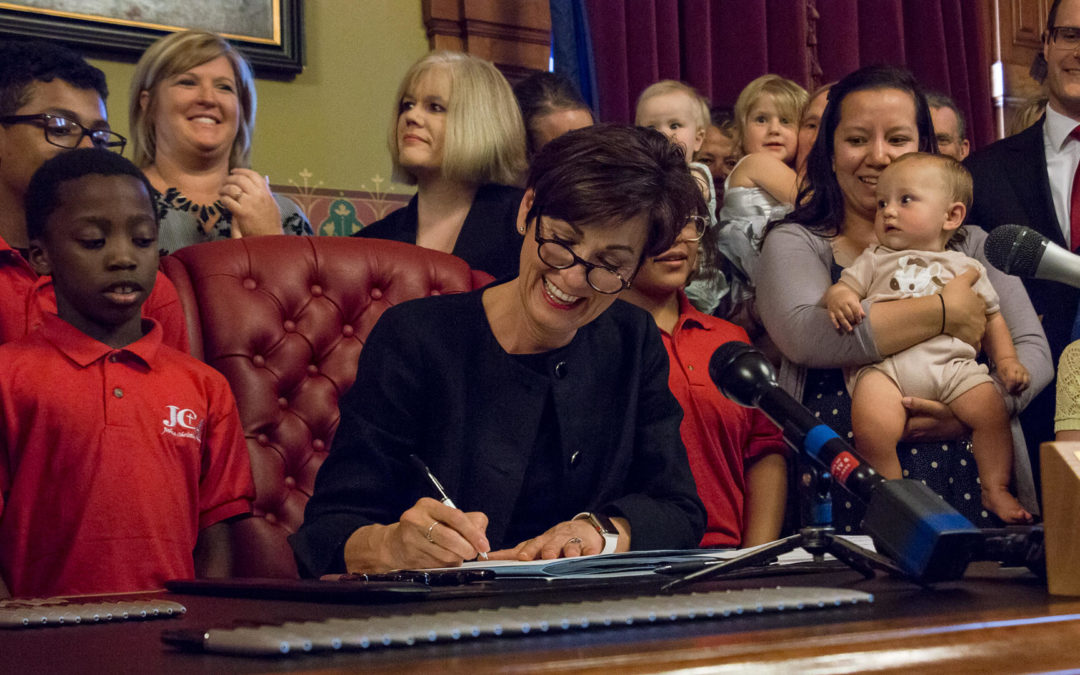 On Friday, Iowa’s first female governor, Republican Kim Reynolds, signed the Fetal Heartbeat Law, banning all abortions once a baby’s heartbeat can be detected — the strictest anti-abortion law in the country.

After signing the bill into law, Governor Reynolds said in a statement:

“If death is determined when a heart stops beating, then doesn’t a beating heart indicate life? For me, it is immoral to stop an innocent beating heart. … I understand and anticipate that this will likely be challenged in court, and that courts may even put a hold on the law until it reaches the Supreme Court. However, this is bigger than just a law. This is about life.”

Predictably, Planned Parenthood has already taken steps toward legal action, although, as we’ve repeatedly discussed at The New Guards, this legislation is fully constitutional. Hopefully the courts agree (or, ideally, resist the tyrannical impulse to exceed their constitutional mandate by striking down laws they disagree with).

The Fetal Heartbeat Law marks a tremendous victory for life in America, and while conservatives’ rightful aversion to identity politics typically means we don’t consider race, gender, or any other non-ideological factor in the crafting of law, I think it’s important that we recognize the significance of Governor Reynolds’s gender and the potential to advance the pro-life agenda if more women like her step up.

It seems like any time a conservative man talks about abortion, someone will inevitably accuse him of mansplaining, misusing his privilege, or telling a woman what she can or can’t do with her own body. Character attacks of this sort are, of course, childish and irrational, but they sure do kill a conversation. It’s far easier for a woman to credibly promulgate her stance for life than it is for a man, purely because it removes identity politics — or at least another layer of it — and brings us one step closer to discussing ideas. Furthermore, conservative men are constantly bombarded with accusations of being uncaring toward women; if conservative women take the lead in the life movement, this allegation loses water.

There are several prominent women spearheading the pro-life movement, among them Lila Rose and Allie Stuckey, but we need to dispel the myth that women are exclusively or even predominantly pro-abortion, as the Democrats would have you believe. As a matter of fact, women are virtually split on the issue, and in many ways are actually more favorable to life than men. Unfortunately, they’re often silenced by a brash, extreme wing of the Left and accused of despising their own womanhood.

Pew Research reported in 2016 that statistically, there is “no gender gap in views on whether abortion should be legal.” In that study, 41% of women said that abortion should be “illegal in all/most cases,” compared with 40% of men. Notably, there were slightly more women than men (4% vs. 3%) who were undecided on the issue. Pew published an additional study the following year in 2017 showing that 38% of women opposed abortion, compared with 42% of men — a slight change, but still very similar.

Gallup presented a slightly wider margin in 2014, 41% of women and 51% of men considering themselves “pro-life.” However, these results show far more undecided women than in the 2016 Pew study and nearly double the amount of undecided men in this 2014 report: 9% of women vs. 5% of men. In 2017, Gallup found that the gender gap had been cut in half: 43% of women and 48% of men identified as “pro-life.” But despite a slight majority of women calling themselves “pro-choice,” women were actually more likely than men to say that they consider abortion “morally wrong” — 49% to 48%.

This is where simple distinctions of “pro-life” and “pro-choice,” or even vague statements that abortion should be legal or illegal in “all/most cases,” get a little hairy. As Vox acknowledges, there are scores of voters with contradictory views on abortion, such those in favor of ensuring that abortions are kept rare but who say government should stay out of it, while simultaneously opining that Roe v. Wade should remain untouched.

The details matter. And lucky for us, the details actually help our case even more.

According to a 2016 Marist poll, women are markedly more in favor of restricting abortion than men when asked to consider specific policies. Citing this study, Real Clear Politics reports, “77 percent of women support limiting abortion to – at most – the first trimester. That is slightly higher than the percentage of all Americans – 74 percent.” Additionally, only 23% of women supported second or third-trimester abortions, contrasted by a whopping 40% of men. Real Clear Politics continues, “61 percent of women think it is important, or an immediate priority, for our government to restrict abortion in this way,” while only 58% of men answered similarly.

80% of women responded that it is possible to enact laws which “protect both the health and wellbeing of a woman and the life of the unborn,” with only 75% of men replying in the affirmative. 51% of women believe that “abortion does more harm than good to a woman,” edging out men by 2 points.

Men and women voted identically against using tax dollars to fund abortions within the country (61%), as well as abortions internationally (83%). Finally, 59% of both men and women consider abortion “morally wrong.”

Last year, countless women were barred from the Women’s Marches because although they opposed President Trump, they still believed in the sanctity of life.

Of the six female governors in this country, four are pro-life Republicans.

Do you think we can finally lay the myth to rest? Pro-life women are not an anomaly; they are the very core of our movement. Men who speak out against abortion in order to defend their families and the weakest among us are warriors, but the fight for life also needs nurturers. Just like a child is far more likely to flourish under the care of both father and mother, so too does our cause need vocal women just as much as it needs outspoken men.

We have a lot of men already; we need women. Unfortunately, many of them have been shamed into silence — but no more.

Black support for President Trump effectively doubled in a single week because someone stood up and showed that it was okay to cut against the grain. If women can do the same, life will finally win.