How to Know if an Allegation is Credible 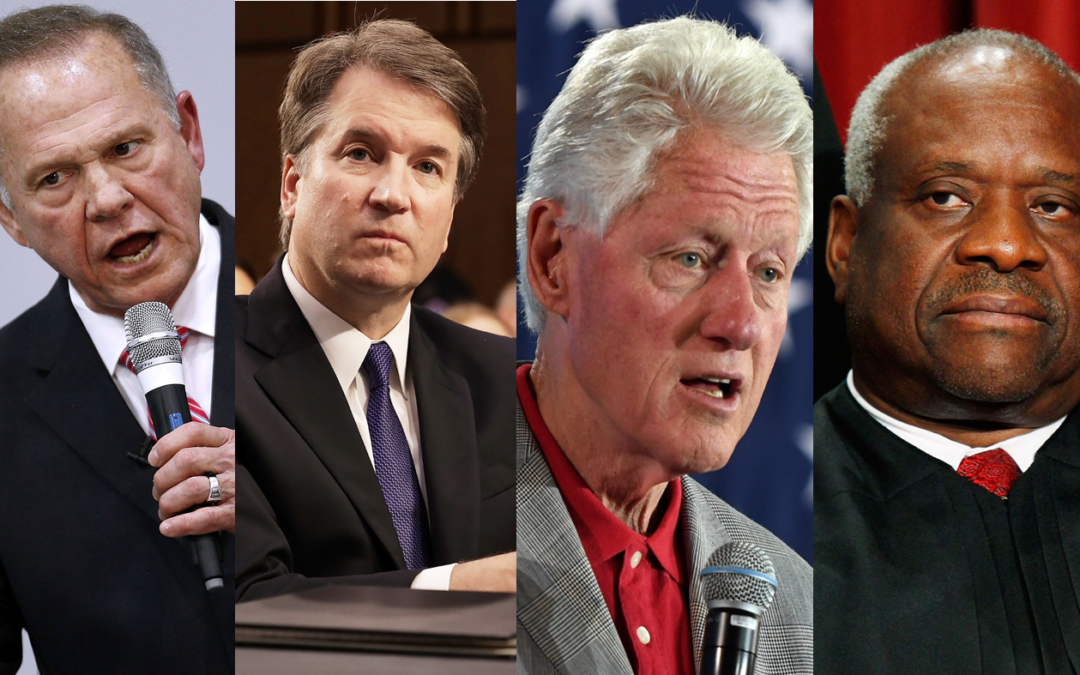 According to the people who surround me (predominantly Leftists), there are a few things that are plainly true: Brett Kavanaugh is guilty of assaulting Christine Blasey Ford, Clarence Thomas is guilty of harassing Anita Hill, Roy Moore is guilty of assaulting a lot of young girls, and Bill Clinton is not guilty of raping Juanita Broaddrick. As for me, I only agree with one of these contentions, but hey, the majority rules, right?

So let’s accept the majority view as gospel truth — not the actual majority, mind you, since only about 25% of people actually believe the Kavanaugh allegations are credible, but the majority of Leftists. Kavanaugh, Thomas, and Moore, guilty; Clinton, not guilty.

How does the Left arrive at this conclusion? How do they determine whether an allegation of sexual assault is credible? Whatever their process is, I’m sure it’s consistent. So let’s see if we can figure it out:

One factor must be that the accuser can corroborate such essential details as time, place, and (most importantly) contact with the accused.

Anita Hill worked for Clarence Thomas in a government capacity, so there are official records which corroborate their contact, including time and place. Several of Roy Moore’s accusers have corroborated contact with him whether at a restaurant or even their own homes. Juanita Broaddrick and Bill Clinton had documented contact with each other, Broaddrick was confirmed to have stayed at the hotel in question on the alleged day, and Clinton was confirmed to have been in town that day with no alibi.

How about witnesses? That term is loose here, since these types of events typically occur in seclusion. But did the alleged victim at least tell anyone at the time about the incident?

Anita Hill apparently told a few of her coworkers about the harassment as it was ongoing, although the Senate never heard their testimony because they believed it was likely biased — the women had ended their employment with Thomas unfavorably and could have had a vendetta. Several friends and family members confirmed that Roy Moore’s accusers had told them about the assaults shortly after they had occurred. Broaddrick told at least five of her friends about the alleged rape at the time, including one who found Broaddrick while she was still beaten and bloodied.

Ford, however, didn’t tell a single person about the event for twenty years, at which point she told her husband. Then, after another ten years, she told her therapist. But in all that time, she never mentioned the name of the perpetrator. Now, thirty-six years later, she’s accused Kavanaugh and Mark Judge, both of whom deny the accusation. She doesn’t remember anyone else at the party that night, and obviously she didn’t tell them about it either.

Therefore, since Ford didn’t tell anyone and we know she’s telling the truth, and Moore’s accusers did tell friends and family and they’re truthful, but Broaddrick did tell half a dozen people and we know she’s lying, then disclosing the incident to someone at the time logically can’t be the standard.

Typically, an assailant doesn’t just assault once and then retire. So if someone is guilty, you might expect other accusers to come forward.

Response of the Accused:

Perhaps we can gather the truth from how the accused reacts to it?

Clarence Thomas vehemently denied his allegations on the Senate floor. Moore said, “If they say I dated them, I dated them” but later walked it back. Clinton denied the accusations, admittedly after having perjured himself on a different allegation. Kavanaugh also denies the charge. There’s no clear pattern here, so that must not be the standard.

What if there were a way to detect lies? Like a polygraph!

I think it can be safely assumed that, where possible, a victim of sexual assault will avoid their assailant.

But that doesn’t explain why Anita Hill followed Clarence Thomas to another job after the initial harassment was alleged to have taken place, nor why she called him and met with him on multiple occasions after she no longer worked for him. It also doesn’t explain why Broaddrick was so curt with Clinton when he apparently tried to apologize thirteen years later — after all, he wasn’t even guilty! So that doesn’t prove anything.

The FBI investigated Hill’s charges because the alleged behavior occurred on federal property between federal employees, placing the matter under federal jurisdiction. After three days, it found nothing. Then Anita Hill famously testified before the Senate Judiciary Committee regarding her allegations after the initial confirmation hearing for Justice Thomas had ended. Afterward, Thomas countered them. Then the Senate voted. As we know, this proves Thomas was guilty.

As we speak, the Senate is in negotiations with Ford to see if she will testify. She didn’t want to, then she did, then she didn’t again, then she rescheduled, then she would only do it if we could subvert our centuries-old system of justice by making the accused defend himself against charges that haven’t been made yet, by denying the accused his right to face his accuser, and by insisting that only old white men question her while she complains that only old white men are questioning her. And now she might not want to do it again, especially since the FBI won’t investigate a state crime that happened 36 years ago (give or take) in an unknown location, perpetrated by a man who has passed six FBI background checks. This all means that Kavanaugh is guilty.

So we still don’t know the Left’s standard for determining whether an allegation is credible. But don’t lose heart, we’ll try one more.