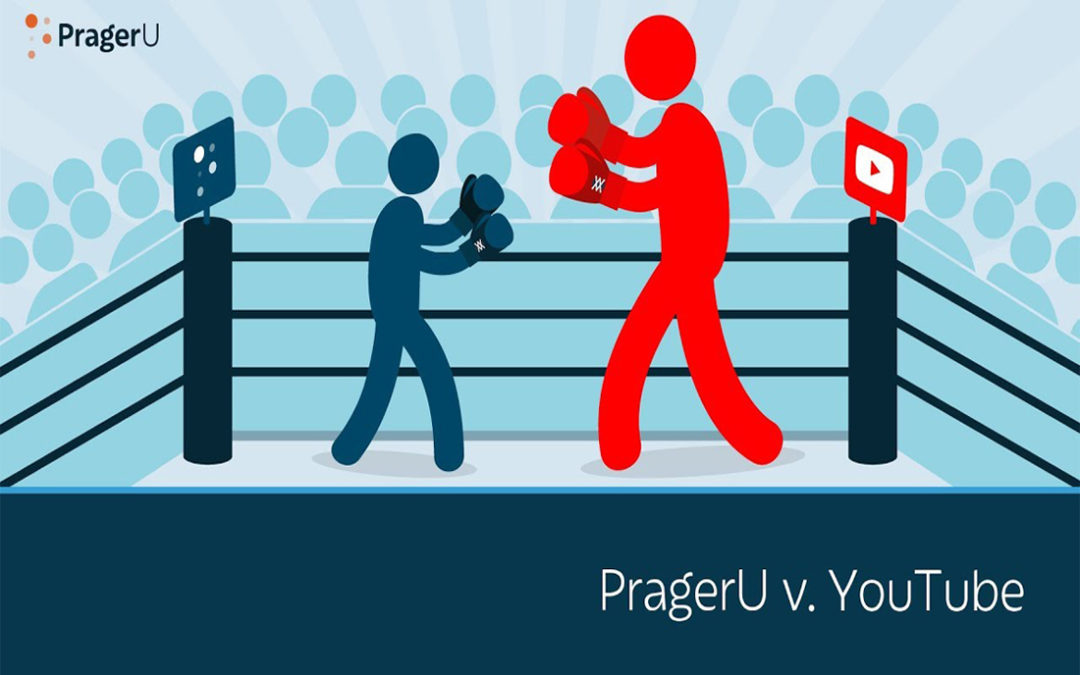 Basically nobody understands the Constitution. Based on several examples I’ve seen recently, this apparently includes many conservatives, who are among the only groups purporting to care about the Constitution as originally written. So I’ve decided to throw a quick constitutional crash course for un- and ill-informed conservatives before they do something stupid like, I don’t know, sue YouTube or something.

So let’s just go there. Conservative YouTube channel PragerU is suing YouTube because the platform demonetized many of the channel’s videos, branding them “inappropriate.” This designation prevents them from being viewed in restricted mode (a mandatory setting in school libraries) and extends to many of the channel’s non-political, educational videos.

Sounds bad — stupid YouTube. Man, they stink. But no matter how awful we might think YouTube is, do you know what’s not involved here? That’s right, the First Amendment.

As we discussed on The Proving Ground, PragerU and similarly situated channels have several potential avenues to pursue in alleging that YouTube has violated its terms of service or falsely advertised; however, the worst possible argument PragerU could make is that YouTube has violated their freedom of speech as guaranteed by the First Amendment. So logically, that’s what they’re running with.

For our constitutional analysis, we’ll have to take a deep look at the First Amendment, all the way into the first word: “Congress.” Hmm, that’s not YouTube. Maybe if we keep reading: “Congress.” Sorry, got held up there again. “Congress shall make no law . . . abridging the freedom of speech.” So just to be clear, the First Amendment applies to Congress, not to YouTube.

Now, the Supreme Court likes to complicate things, but not even the Warren Court could distort the First Amendment enough to help PragerU. In Marsh v. Alabama in 1936, the Supreme Court held that a privately owned company town had violated the First Amendment rights of Jehovah’s Witnesses handing out pamphlets, reasoning that the town operated in a public function. The Court has clarified that when a private individual or group exercises a function “traditionally exclusively reserved to the State” (Jackson v. Metropolitan Edison Co.), that private entity essentially transforms into a public one. But as Justice Kavanaugh recently (and in my estimation correctly) wrote, “Merely hosting speech by others is not a traditional, exclusive public function and does not alone transform private entities into state actors subject to First Amendment constraints.”

Next up, symbolic speech. Candace Owens, noted “conservative” activist gives us a double whammy with this tweet: “If I were President, the punishment for burning the U.S flag would be the renunciation of citizenship.”

First, the president doesn’t make laws, and I am so sick of this trope of “if I were president here’s what the law would be.” If I were president, I would veto almost everything that came across my desk. But anyway, the first line of the actual body of the Constitution says, “All legislative Powers herein granted shall be vested in a Congress of the United States, which shall consist of a Senate and House of Representatives.” Let’s go through this one at a time: “All.” Okay, okay. “Legislative powers.” Checks out. “Congress.” Oops, so close.

But most importantly, the right to burn the American flag is one of the core freedoms that the flag symbolizes, as legendary magicians Penn and Teller have long demonstrated. In the United States of America, you can hate your government. You can say that out loud. You can even protest your government through verbal and symbolic speech. You have a right to speak, even when your speech is unpopular or transgressive. A right doesn’t make it good, but equally true is that being bad doesn’t make something not a right. Even under Supreme Court standards, flag burning would never in itself constitute “incitement to imminent lawless action” — not even close.

Whatever Candace, President Trump, or Steve Scalise think they’re protecting when they call for a ban on flag burning, it’s not the First Amendment.

Should religious bakers be allowed to refuse service based on their religious beliefs? As I argued in 2017, Colorado baker Jack Phillips had a strong case-in-chief defense that he did not violate the discrimination statute in question at all.

But if someone wanted to argue that such a state law was unconstitutional, religious freedom is not the ideal argument. Instead, you could argue based on freedom of speech, that the customization of cakes (or other direct participation in a wedding like photograph) constitutes a message or expression that the state is compelling someone to make. The government can’t compel speech. #FirstAmendment.

Otherwise, someone could go for the throat and argue that the Civil Rights Act of 1964 is unconstitutional because it violates the freedom of association and property rights, that a business owner has a right to refuse service to anyone for any reason because you have no right to his stuff or labor. I’ll repeat what I said about flag burning: a right doesn’t make it good, but equally true is that being bad doesn’t make something not a right. If someone won’t serve someone because of their race, they’re a disgusting racist, but I repeat myself.

Religious freedom arguments, on the other hand, prove too much in this context; they say that ordinarily a person wouldn’t have the right to refuse to give their own speech, labor, or property, but because I’m religious there’s some bulletproof exception. That’s not how the Constitution works. You cannot be forced to violate your religious beliefs, but the government also doesn’t (or shouldn’t) just violate the rights of atheists while protecting the rights of Christians. If you won’t fight just as fiercely for an atheist’s free speech as you will for a Christian’s, you don’t believe in the Constitution.

This approach skews the Constitution against unbelieving Americans, and on a practical level it further alienates mainstream religious people. Hard pass.

This isn’t about the wisdom of red flag laws, which, as David French describes, would grant “standing to a defined, limited universe of people to seek temporary seizure orders — called gun-violence-restraining orders — for a gun if they can present admissible evidence that the gun’s owner is exhibiting threatening behavior.” I happen to think red flag laws would be abused and should not currently be pursued, but that’s a pragmatic opinion. They could be an excellent solution to gun violence if drafted as French proposes, but I doubt they would be.

Regardless of your view on that issue, however, red flag laws are not per se, or inherently, unconstitutional.

Some proponents of the Second Amendment, like Thomas Massie (one of my favorite people in government) might point to the plain language of the Constitution: “shall not be infringed.” But we cannot support one clause at the expense of another, and the Fifth Amendment just as plainly articulates that life, liberty, and property may be deprived through due process. Yes, even the ultimate right to life is not absolute. Neither is the freedom of speech, about which I thought Congress could “make no law.” Due process allows for some restrictions — for instance, barring felons from owning guns or even simply putting convicted criminals in jail — as long as due process has been respected.

Properly written, the very basis of red flag laws is to provide due process to every individual upon whom a concerned party seeks to place a gun violence restraining order. Emphasis on “properly written.” I doubt they would be, which is why I don’t love the idea right now. But that doesn’t mean they’re inherently unconstitutional.

The last stop on today’s journey is trade. Whatever you think of President Trump’s ongoing trade war with China, one point rarely discussed is that the president lacks any constitutional authority to unilaterally impose tariffs as he has repeatedly done.

Article I Section 8 of the Constitution makes clear that Congress has the sole “Power To lay and collect Taxes, Duties, Imposts and Excises” and to “regulate Commerce with foreign Nations.” Executively imposed tariffs are unconstitutional, even if it’s your guy in office.

You might point out that Congress has authorized the president to do so under the Trade Expansion Act of 1962 and the Trade Act of 1974. This brings us to the nondelegation doctrine.

Congress has no authority to give its Article I powers to the other branches because the powers do not belong to Congress; they belong to us. Congress has the authority to exercise that power because we the people have authorized them to do so. But just like giving your teenager your car keys doesn’t authorize her to let her friends drive your car, enumerating Congress’s powers doesn’t authorize our representatives to delegate that authority elsewhere.

Thus, the constitutionality of trade is as simple as it looks: that power can only be exercised by Congress.

I could go on about the Patriot Act and TSA’s violations of the Fourth Amendment or countless unconstitutionally delegated powers, but you get the idea.

We should take care, in our attempts to defend the Constitution, not to make it worse by expanding case law in undesirable ways. We can’t call ourselves constitutional conservatives if we aren’t conserving the Constitution, and we can’t conserve it if we don’t know what it is.