Both Sides Are Wrong about Illegal Immigration, Part 2 of 2 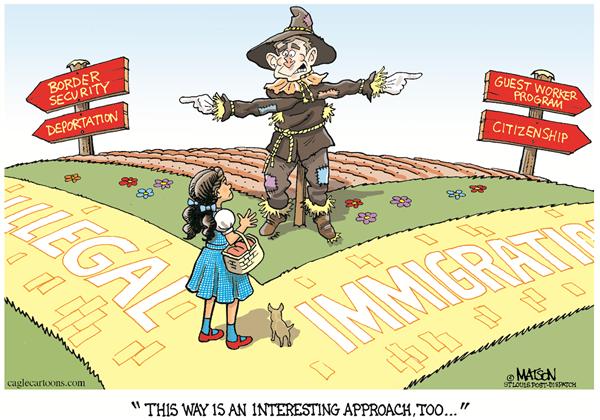 In yesterday’s article, I debunked several common arguments for and against illegal immigration, because everyone is wrong. If you haven’t read that piece yet, go ahead and do it now. If you still have questions after reading both of these, I’d be happy to hear them.

As promised, today I’ll tell you what the real problems are and give you the solution. It’s a lot easier than many would like you to believe.

So just call me Mighty Mouse, because “here I come to save the day!”

The Real Problems and the Real Solutions

There are actually only three problems. With the first two, as often cited by Ben Shapiro, if you solve one you’ve essentially fixed the whole system. For the sake of thoroughness, we should probably solve both. The third one absolutely needs attention.

That’s it. That’s the whole problem.

There’s no incentive for law-abiding immigrants to go through the process the right way. They could save a whole lot of time and struggle by just crossing the border in one of its many unpatrolled areas and starting their new American life. Their respect for our laws deserves our respect.

Beyond that, illegal residents of the United States have relatively easy access to government benefits. Many social programs like Medicaid require a social security number, but many can gain access to care through their U.S.-born children (we’ll get to point #3 in a second). Not to mention free primary and secondary education for even non-U.S.-born children of immigrants and all the benefits which come from that, such as extracurricular activities, all on the taxpayers’ dime.

Here’s how you fix problems one and two:

First, secure the border. Contrary to what the Left will tell you, that doesn’t mean shut down the border. But we, like all countries, should be aware of who is coming in and going out at all times.

Next, make it easier to obtain a work visa. If an upstanding man from Tijuana wants to work in San Diego every day, let him. Then let him cross the border after work and return home. If a Nicaraguan worker wants to spend two weeks here then one week at home to offset travel time/costs, there should be a much simpler system in place for that to happen. Bottom line, in a free market, the best worker wins.

Finally, shut down access to taxpayer-funded government programs. If you don’t put anything into the system, you shouldn’t be able to take anything out. Many will say, “But that’s what they’re doing by working, often beautifying our homes and neighborhoods.” Right. That’s why they get paid. You work, you get a paycheck. But you don’t get taxpayer dollars unless you pay taxes. I can’t demand an insurance company foot the bill for my car accident if I don’t have insurance.

This will incentivize legal immigration. If you go through all the right steps and become a legal resident (not even necessarily a citizen) and you pay taxes and contribute to society, you can qualify for programs or work-related insurance benefits; your kids can go to public schools for free. There has to be some sort of benefit for obeying the law.

And once we limit benefits to legally documented immigrants, illegal immigrants won’t be a nuisance to the system and won’t have nearly as much reason to work here (I bet the Left doesn’t think Mitt Romney’s “self-deportation” theory is all that extreme now). Conversely, once we adequately secure the border, there won’t be so many illegal immigrants vying for benefits in the first place.

The third problem should be simple, and it doesn’t only apply to illegal immigrants but to legal visitors as well. The Center for Immigration Studies concluded in 2010 that in America, 300,000 to 400,000 babies are born annually to illegal immigrant mothers from across the globe (no statistics on fathers), and that doesn’t even include foreign women who give birth while legally and temporarily visiting the United States on business, as a tourist, etc. Known as “birthright citizenship,” “birth tourism” or more pejoratively “anchor babies,” this policy grants a foothold for illegal immigrant parents–not only because it complicates their potential deportation and grants access to food stamps, Medicaid, and other benefits through their children, but it also allows their child to sponsor their citizenship and/or residence once the child becomes an adult. If you have a baby here, you have a free pass to stay.

According to Jon Feere at the CIS, only around 15% of nations sponsor this policy–29 of 30 in the Americas, plus Fiji–and the United States and Canada are the only two with “advanced economies.” Furthermore, while “the U.S. Supreme Court has held that the U.S.-born children of permanent resident aliens are covered by the Citizenship Clause [of the 14th Amendment],” it “has never decided whether the same rule applies to the children of aliens whose presence in the United States is temporary or illegal.”

That’s about all there is to it. We fix those three things–border, benefits, and babies–and we’ve solved illegal immigration.

The only remaining step is to determine what to do with people who are already here once the borders are closed, but that’s pretty simple too.

But for those many honorable people who have kept the law while here, just register, pay a fine, and start a path to citizenship or at least a path to legal residence. Yes, I’m aware that was an Obama policy. Did you know it was also enacted by Reagan? We reject authoritarian party loyalty here at The New Guards, so let’s just call it as we see it.

Most legal immigrants never seek full citizenship either because they can’t afford it or they don’t want it. Gaining citizenship could possibly be easier, but there’s no doubt that a country has the right and arguably the responsibility to be choosy when handing out citizenship status. We seek for people who will better our country and society, who share our values, and who will contribute to a thriving American economy, and not all of them were born in the U.S.A

Whatever the standard for naturalization, it simply doesn’t make sense to deport all illegal immigrants. Some, maybe many, but not 11+ million. The time, money, and personnel involved, plus splitting up families and the hassle that would cause–it’s just not logical. But fix the border, benefit, and baby situation, and we’ll have a pretty good start.