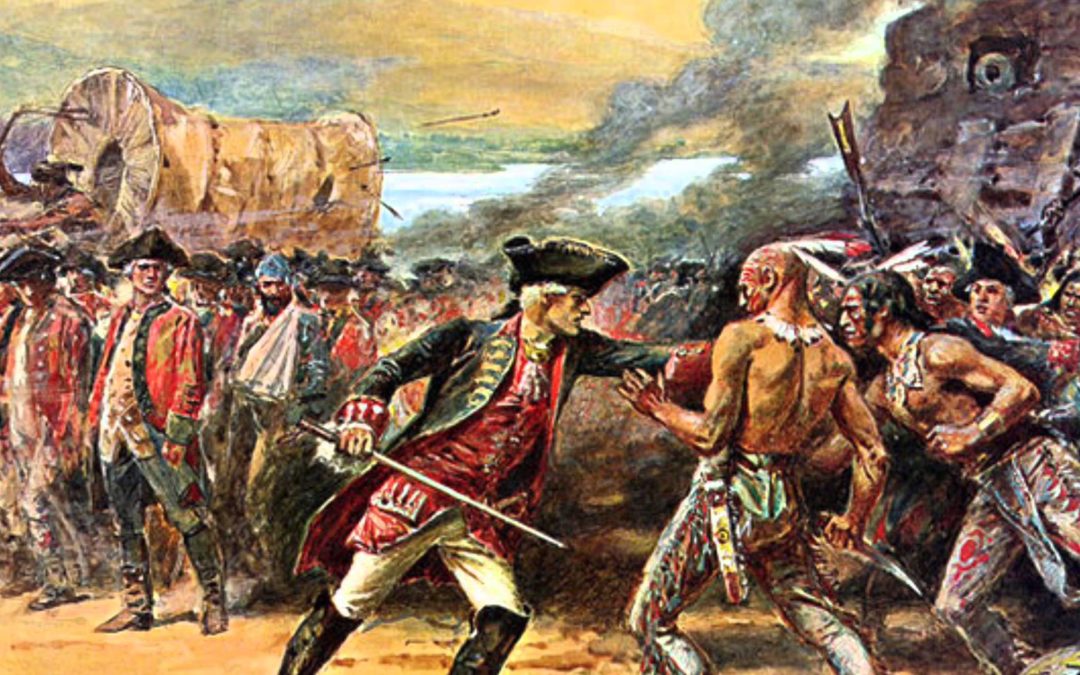 In 1754, a young Lieutenant Colonel George Washington led an ambush against a French-Canadian patrol in Pennsylvania. Washington won the Battle of Jumonville Glen with ease — the first conflict of the French-Indian War.

Facing off against French soldiers, French colonial troops, and several warring Native American tribes, the British military combined with its North American counterparts in a contest over the hotly disputed land of the New World.

For many British colonials, this was their first interaction with their native countrymen. In their eyes, they were brothers — separated by an ocean but still equally and proudly British. However, as the allied groups mingled, they became aware of some curious differences in temperament, habits, hobbies, interests, and even speech. Although the British wouldn’t develop their non-rhotic “English accent” until the Revolution, British colonials distinguished themselves with certain changes and additions to the common vocabulary, including words like “tomato” and hybrids like “catfish.”

They continued fighting together and ultimately defeated the French together 1763, obtaining French territories for the king they both served. But a seed had been planted in the hearts of British colonials that would be harvested just over a decade later in a declaration of independence from their mother country.

For the first time, they began to see themselves as not quite British. They were starting to become American.

For generations, conservatives have found a home in the Republican Party. Maybe we don’t always come from the same place, but we pledge allegiance to the same flag, republic, and leadership. We’re not the only Republicans — there are those who hail from the mainland, or “mainstream” Republicans, as well as other colonized territories like moderates, libertarians, and even the occasional liberal — but we feel welcome here; this is our home, and we belong here just as much as anyone else does.

But there comes a time when conservatives start to realize that maybe we’re not quite Republicans. We focus on different causes. We don’t use the same vocabulary of natural rights. Our political interests vary, and we prefer to engage in productive debate rather than the mainstream hobby of “owning the libs.”

Perhaps there have been several catalysts, but by far the biggest and the one ongoing — the Republican French-Indian War — is the Trump presidency. Conservatives are forced to reckon with the revealed nature of their long-respected leaders who now refuse to call a spade a spade. Leaders like Sean Hannity and Rush Limbaugh, who used to represent all of us, now subscribe to an Always Trump philosophy, where economic policies that have long been acknowledged as counterproductive at best and which caused the greatest financial downturn in American history are now the only way America can get ahead; oppressive dictators who murder droves of their own citizens are now to be respected for their strength; declaring executive amnesty for millions of illegal immigrants suddenly becomes not only constitutional but praiseworthy; and Supreme Court picks responsible for the judicial rewriting of Obamacare as a tax rather than a fine are now the most conservative pick since Clarence Thomas.

I could go on.

Like never before, conservatives have recognized in the past two years that we are a minority within our party. Our speech, interests, and principles differ wildly from those of mainstream Republicans whom we used to think were just like us.

Maybe the party can be saved. Just as the Founders did, we ought to exhaust our recourses before resorting to total separation. As I’ve said many times before, conservatives haven’t exactly put their best foot forward.

But rather than simply shedding the identity of Republican, I would hope that we can primarily prioritize our allegiance — that we see ourselves as conservatives first, and maybe Republicans second. If we hope to see conservatism advanced, it’s essential that we adopt a conservative identity.

And then, when we truly have no place in the mainland, I hope we have the moral courage to declare our independence.