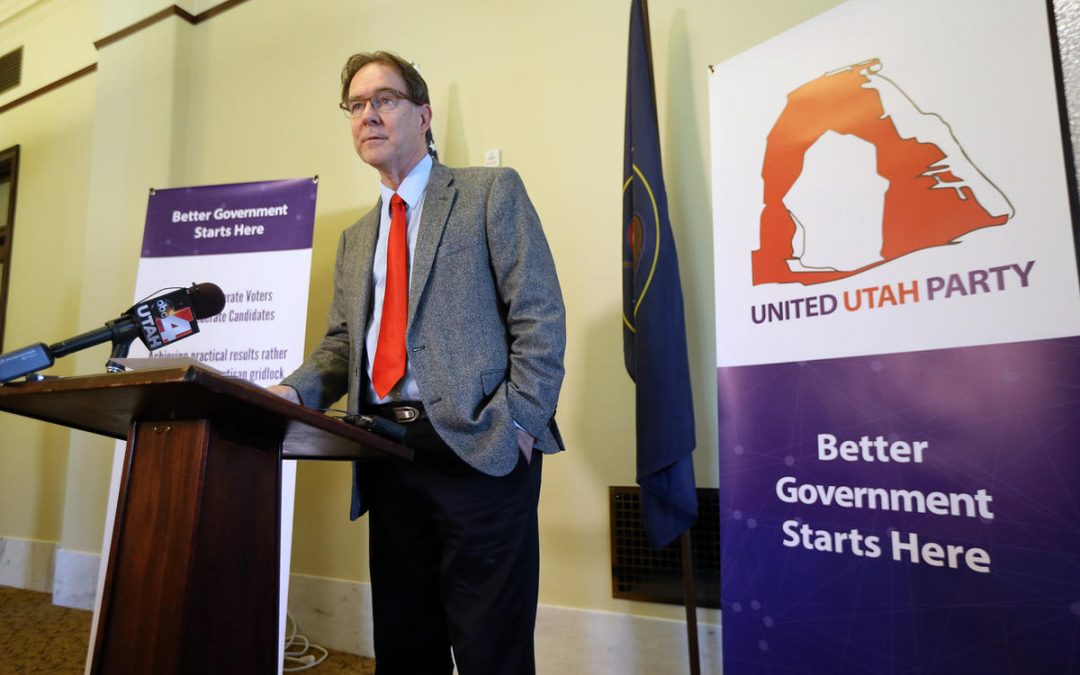 Recently, a new third party has formed in Utah, the state in which I live, called the United Utah Party.  The United Utah Party is made up of individuals who, as Professor Richard Davis of Brigham Young University puts it, feel that “extremes on both ends — from the Tea Party on the Republican side to the Bernie Sanders movement on the Democratic side — have come to dominate the two major parties. The search for common ground has been lost, and civility has been discarded in pursuit of passionate causes. … Elected officials should seek pragmatic solutions to our policy problems rather than continue the partisan gridlock that characterizes today’s political system. We want representatives in Washington who will bring other representatives together rather than join the excessive partisanship in Washington.”  While I too am alarmed by the normalization of socialism that the rise of Bernie Sanders has achieved, I doubt that my concerns are the same as Professor Davis’s.  As a centrist party, the United Utah Party hopes to transcend partisan, ideologically driven politics and focus on pragmatism and what works, fostering compassionate, cooperative government that we all want and will make everyone happy.

What a nice idea!  Democrats, Republicans, Republicrats, Liberals and Conservatives all getting along just as our Founding Fathers intended.  The United Utah Party will be the party for everyone!

Except there are a few problems with this, and I’ll outline a few of them:

In their haste to abandon the “destructive politics of ideology” and be a party for everyone, Professor Davis and those like him have chosen to abandon the one thing that keeps a party together and functioning: ideology. Having an ideology of course limits your reach to those who share your ideology or whom you can convince of it, but at the same time it is the connective tissue that holds your group together.   And the sad truth is, that a party for everyone is really a party for no one.  Without a set ideology or principles guiding you, what is the appeal to be part of it?  What makes you, you?  Professor Davis suggests pragmatism and cooperative compassion/tolerance, but what determines what is pragmatic and what is good cooperation?  Without ideology how do you define good policy? Economic output? Popularity? The rejection of “ideology” in favor of pragmatism and cooperation deprive the party of any real draw to it and make it an undefined group that can be blown by any wind of policy or idea, and that tries to open the door to everyone but in the end will hold no one.

The second problem with this new centrist party is the principles they claim to embrace, pragmatism and cooperation.  Pragmatism is a philosophy based on whether something works or often what is viewed as necessary in the moment.  That sounds pretty good, right?  Often it can be, but there is subtle danger that lies in basing one’s beliefs around pragmatism alone.  The danger in it lies in the fact that it is ammoral in nature, with the belief that expediency surpasses right, and that leads to tyranny and a disregard of rights.  It may be pragmatic to use slave labor, as it creates a cost-free workforce, or pragmatic to force a redistribution of wealth, violating property rights.  It could be pragmatic to vest all governmental power in the president.  All of these things are immoral or dangerous, but could be argued for from a pragmatic position.

Their second major principle, cooperation, isn’t any better.  Cooperation is effective and good when you have two or more groups working towards the same goal but with different processes, but it is impossible when you have two groups with opposing visions, and results in one side losing ground.  Additionally, if your purpose is to achieve compromise, your position is completely at the mercy of the whim and position of the other two parties.  What if the positions of the two parties are both in an immoral or terrible place; do you find the medium of both bad ideas?  You really don’t stand for anything of your own.  The only way to actually stand for things is to pick sides in issues, and from their description of some issues, it is clear this party will align on the Left more than the Right.

The final problem with this new party is it fails to recognize that what is going on in America right now isn’t just a heated discussion over the best way to run government or the best way to accomplish things, but is in fact a war over what America is and what it should be.  It is a war of two competing visions, not two competing processes.  On one hand we have the Democrats and the Progressive Statists who are pushing to create a large welfare state, with massive redistributive policies, complete government control of the market, rule by unelected bureaucrats by decree, with little if any individual liberty and unbounded government power.  Many moderate Republicans and the Republican establishment are not opposed to this vision, just are hesitant to go peddle to the metal and want to go at a more slow pace.  If you don’t believe that just look at the so called “Repeal and Replacement” of Obamacare, where Progressive Statist policies are protected and continued by a Republican controlled House and Senate, leading us towards a government controlled healthcare system, with all of its lack of respect of rights and economic costs.  On the other side you have those conservatives and libertarians who have not bowed the knee to Baal by embracing big government so long as it’s run by Republicans, and are opposing the continuance of government controlling the healthcare market.

This struggle is very real and will determine whether the United States remains a country with a government that protects rights or becomes a full on welfare state where rights are preyed upon by the majority and state itself.  By declaring itself to be above this struggle or even pretending it is not there, the United Utah Party plays itself into the hands of those who wish to destroy freedom in the United States as they do not stand up to the challenge to individual liberty by the Progressive Statists and often adopt their policies or tactics in the name of compromise and pragmatism.

This United Utah Party, therefore, is a threat to only one side in this conflict: the Republicans and those who wish to defend individual rights and constitutional limited government.  The United Utah Party will pull those who were unwilling to fully label themselves as Progressive Statists, because they felt uncomfortable being “pedal to the metal” but are not completely uncomfortable with their endgame, as it will give them the excuse or out to no longer be “tainted” by conservatives and libertarians within the Republican Party.  These lukewarm people will get to say to themselves and their progressive friends, “Oh we’re way more reasonable and enlightened than those guys” and pat themselves on the back for their “intelligence” and being above it all, while they drift farther and farther to the Left and being fully progressive.

So do I think this party can be successful in Utah?  I think it has the potential to be.  Utah may be one of the reddest states in the Union, but you’ll quickly find when you see who they have elected and who much of party leadership is, that red does not equal conservative.  Many within Utah, especially along the Wasatch front, in Provo for instance, would describe themselves as moderates.  I was recently in a political science class where almost the entire class was made up of Mormons, commonly perceived as very conservative, and the vast majority of the class described themselves as moderates.  This attitude I think is spreading in Utah, among Mormons, for reasons I won’t articulate here, and provides a centrist group like the United Utah Party an opportunity to draw these people to it.  I do not think they’ll push the Republican Party out of power here in Utah, but I think it has the chance to be competitive, especially in this time where the Republican Party is largely defined by or associated with President Trump.  Despite this, the weaknesses and dangers of a party dedicated to pragmatism and trying to avoid ideology will remain and prevent this party from being a long term competitor in Utah and will lead it further and further Left.